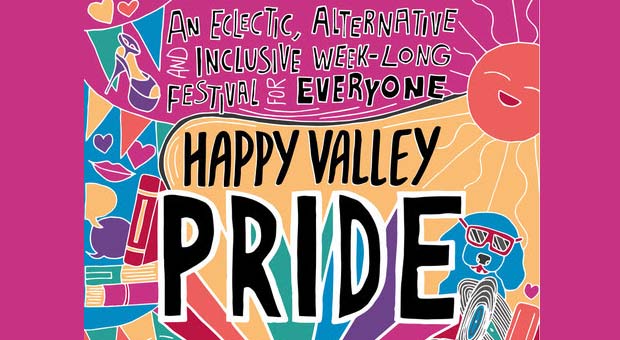 Hebden Bridge is about forty minutes from Manchester by train and is a remarkable place. Every weekend has a festival of some kind and one of the main jewels in this crown is Happy Valley Pride which returns next week.

Canal St Online’s Chris Park spoke to Happy Valley Pride Chair, Tim Whitehead, to find out what’s going on this year and why it is more important than ever that we show a united front.

It is the fourth Happy Valley Pride, what’s in store?

It keeps getting bigger.

The opening night is great this year. We have Barbara Nice who is a Hebden Bridge favourite having played at The Trades. She did well on Britain’s Got Talent this year. I first saw her at Duckie (who are playing Hebden Trades Club on the Saturday but tickets sold out in minutes).

We also have Kirstie Newton who has played locally. She is an amazing pianist, you shout out a song and she can play it. She has prepared some gay anthems so we’re going to have a big singalong.

I have just worked on the Trans Vegas event and we are lucky that Kate McDonnell has agreed to be our new patron. We ran a Stand by Your Trans campaign earlier this year, the trans community are getting a lot of stick at the moment. We have an evening of spoken word in celebration of queer and trans identity called Fluid.

This year we are running events outside of Hebden Bridge for the first time. We have a band night in the Golden Lion in Todmorden featuring International Teachers of Pop and Glove. We also have a cabaret night at Todmorden Hippodrome featuring Jonny Woo’s All Star Brexit Cabaret which was written by Jonny and Richard Thomas who wrote Jerry Springer The Opera. It was a hit in Edinburgh and at the London Coliseum.  Happy Valley Pride favourites Bourgeois and Maurice also bring a new show that night in a double bill.

It’s a little earlier than usual this year, is there a reason for that?

Edinburgh is the reason, we didn’t want to clash with the fringe. We wouldn’t have had Suzi Ruffle if we hadn’t moved the dates. Last year a lot of performers couldn’t make it because they were in Edinburgh.

Last year was your first as Chair, was it a steep learning curve?

It was. My day job is commercial, I work with people like Jinkx Monsoon, Pam Ann and Kiki and Herb. One thing I’ve learnt doing this is worrying about money. We do have Arts Council funding but I have to make sure I am steering it in the right direction. It has got so big so quickly that we need to make sure we can sustain this over coming years.

Have you seen a slide in terms of public tolerance?

Yes I have. Only a couple of months ago I was walking through Hebden Bridge wearing a pink sweatshirt and some girls were leaning out of a car shouting abuse. It happened again two weeks later.

There is a definite emboldening of the far right and its important that we don’t shy away. We have worked so hard to get here and the idea that things might slip back is horrible. It’s important to remember that Pride is not just about having a laugh but it’s political.

What are you ambitions for the festival?

I want it to be sustainable and to succeed for future years.

For all details, please visit