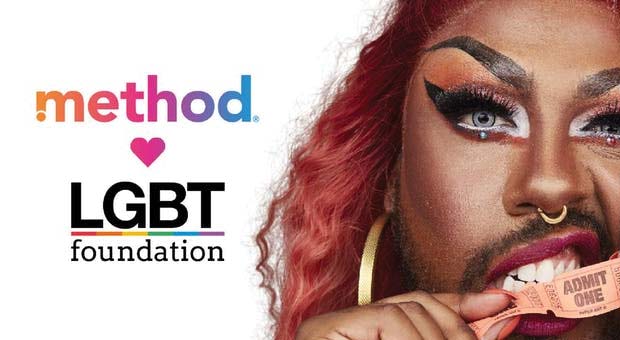 Method has partnered with LGBT Foundation and seven of the UK’s hottest drag acts to launch Drag Cleans – a year-long partnership aiming to challenge stereotypes and make the world a more inclusive, expressive and diverse place.

Over the next 12 months, method will be funding LGBT Foundation’s entire volunteering programme, helping to provide support across a number of projects championing the charity’s #EqualityWins activity – which exists to help ensure a safe, healthy and equal future for all LGBTQIA people.

To celebrate the partnership, method has partnered with some of the UK’s most fabulous drag acts, including Cheddar Gorgeous, Anna Phylactic, Queer Queen TeTe Bang and rising star Drag King, Adam All. The performers will be proving that cleaning doesn’t have to be a drag, by scrubbing up for a ticketed Drag Show in July - complete with a cleaning-inspired ‘lip-sink’ battle - with 100% of the proceeds from the show donated to LGBT Foundation.

Hot on the heels of ASA’s recent ban on the harmful gender stereotypes featured in advertising, the drag artists will front method’s new advertising campaign, launching in September. The campaign will see the Drag Queens, Drag King and Queer Queen showcase their creativity and originality in adverts all over London, whilst subverting the outdated, ‘traditional’ stereotypes that have been associated with cleaning for so many years.

Research commissioned by method found that over half (58%) of Brits are unaware of the correct definition of LGBTQIA, yet the latest government statistics estimate that over a million people in the UK identify as lesbian, gay or bisexual. Research revealed that despite being perceived as the ‘woke’ generation, 52% of 18 -24 year olds were also unable to identify this term correctly. Surprisingly, 42% of this demographic also confessed to not knowing the difference between a Drag Queen and a transgender person.

56% of Brits also admit to never having heard of a ‘Drag Queen’ before, with 70% having never attended a Drag show**. 78% also confessed they had never of a Drag King (female performance artists who dress in masculine drag), despite the term first being cited in print 40 years ago.

In light of the findings, method and LGBT Foundation want to challenge the UK to expand their knowledge and understanding of LGBTQIA communities and embrace freedom of expression and diversity.

“The wonderful world of drag shares method’s love of looking fabulous, with innovation, creativity and unapologetic self-expression at its heart. Cleaning is having its ‘moment’, but the industry has long-been a contributor to tired stereotypes (think 50s cleaning ads!), and method has always played with the norm in order to bring a bit of sass to the cleaning aisle. We want to challenge stereotypes and gender norms with the help of LGBT Foundation and our Drag Talent – to create something truly wonderful, bold and meaningful, that drives positive change.”

“We’re incredibly excited to be partnering with method for the launch of Drag Cleans. We’re looking forward to this year-long initiative showcasing the talent of some amazing drag artists, which have for many decades been an important aspect of our community’s culture, as well as raising awareness of the many different people who identify as LGBT. The volunteer activity method will be supporting will ensure this partnership isn’t just a quick fling, but has a lasting positive impact for people from LGBT communities.”

Method and LGBT Foundation’s ‘Drag Cleans’ event will be open to the public on the 1st August 2019 from 7.00pm at Wringer and Mangle in East London. A limited number of tickets are available to purchase via the link below.

The ad campaign will go live in September 2019.