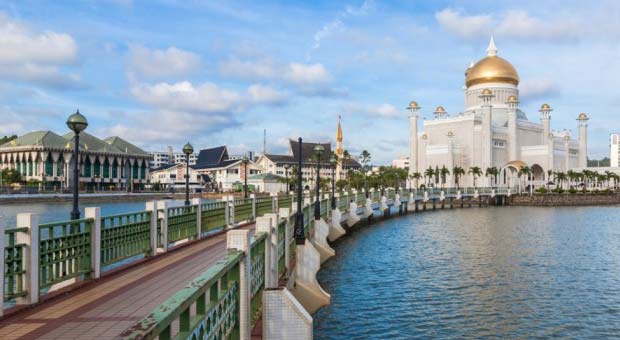 Dan Carter reminds us that it isn't just about Brunei

Brunei has found itself the focus of a media storm since announcing it would put gay people to death by means of stoning.

Celebrities have called for boycotts, politicians have denounced, the Sultan has had honours revoked in what has been major push back on such a draconian measure.

It is an unfortunate truth however, that Brunei is just one of many countries that treat LGBT people with disdain. We shall take a look at 5 of these, most of which are major tourist locations for British people:

1)  Egypt - Famous for its Pyramids and steeped in history, Egypt is a major draw for British travellers with hundreds of thousands flocking to the country every year. Egypt is unfortunately not safe for LGBT people with the society being almost unanimously opposed to LGBT rights. Under strict morality laws a person convicted of partaking in same-sex behaviour can be sentenced to up to 17 years imprisonment and hard labour. Since the 2011 Revolution arrests against LGBT people have only increased with gay men being specifically targeted by police.

2)  United Arab Emirates (UAE) – Dubai and Abu Dhabi are two of the most popular travel destinations in the world with 20 million tourists expected to have visited UAE between 2016 and 2020. Famed for its beauty, modern architecture and hospitality it is regretful that the latter does not apply to LGBT people. Whilst not widely enforced a person convicted of partaking in same-sex behaviour can face the death penalty in UAE. The strict morality laws have seen people sentenced to ridiculous sentences with one man sentenced to 3 months in prison for touching a mans hip.

3)  Brazil – This one will come as a surprise to some with Brazil actually having legalised same-sex marriage in 2013 and Brazil hosting major pride events. In 2017 over 400 LGBT Brazilians were murdered or committed suicide due to homophobic incidents. Brazil recently elected Jair Bolsonaro as President and he has specifically targeted LGBT people with plans to remove references to gay people from school text books and with wide ranging attacks on the community. During his election campaign he actually stated he would prefer his son to die in an accident than be gay. Brazil has opted to turn its back on the community by electing this man and should serve as a warning that LGBT rights can be reversed.

4)  Uganda – Once described as an amazing country by Stephen Fry, Uganda has an appalling record when it comes to LGBT issues. The Ugandan Government and media have encouraged vast campaigns against LGBT people with newspapers drawing up lists of people suspected of being gay. A conviction for same-sex behaviour can lead to a life sentence. Lesbians in the country have come forward to admit being victims of ‘corrective rapes’ by groups of men. David Kato who was a major LGBT rights activist in the country and one of the only openly gay men in the spotlight was brutally murdered after winning a law suit against a magazine who had called for him to be executed.

5)  Russia – Whilst being LGBT is not illegal in Russia the country is dominated by hyper masculinity and state approved homophobia. The Russian Duma enacted legislation in 2013 to ‘protect children from information advocating for a denial of traditional family values’, also known infamously as the gay propaganda law. It has been reported widely that LGBT people face harassment, blackmail or violent crime throughout Russian society. Videos have emerged of gay people being kidnapped by ultra-conservative gangs and essentially being tortured on film. Vladimir Putin continues to peddle the line that the law is merely for the protection of children but as with most despots it appears to be away to scapegoat a community for many of the failings of the Russian government.

Whilst Brunei has rightly been condemned for its attack on the gay community it is important to remember that gay people are still subject to inhumane behaviour throughout the world on a daily basis.

14 countries still impose the death penalty for being a gay person and nearly 60 more still criminalise homosexuality in some way.

Brunei deserves the condemnation but so do all other countries that destroy the lives of LGBT people. We would encourage you to think before you travel and any implications because of their policies.