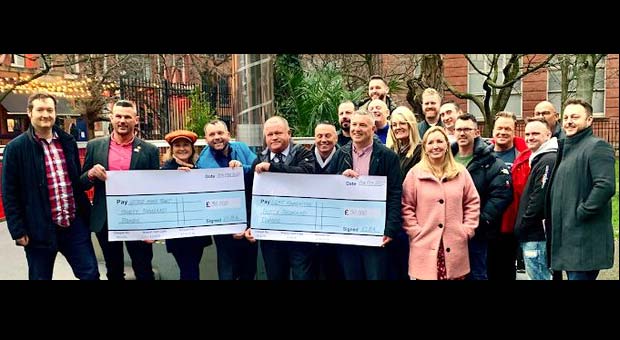 The Village Licensed Business Association have presented LGBT Foundation and George House Trust with a cheque for £60,000 after a major community fundraising drive to help continue vital funding into sexual health and HIV support.

Donations from community members and businesses in Manchester’s Gay Village contributed to the fundraiser, which was set up by the Village Licensed Business Association (VLBA), which represents the areas bars, restaurants, clubs and shops.

The generosity of donations from frequent visitors to the Gay Village’s venues, and from online contributions has so far raised £60,104, which will be shared equally by LGBT Foundation, a charity that supports LGBTQ+ communities across the UK, and George House Trust, who work to eliminate stigma and offer support around HIV.

The funding will support LGBT Foundation to deliver its Condom & Lube Distribution Scheme, which distributes over 90,000 safer-sex packs at bars, venues and to individuals to improve access to safer-sex.

Thanks to the donations, George House Trust will be able to secure the future of its Welfare Fund, which supports people living in the North West with HIV to purchase items that will improve their health and wellbeing.

Fundraising efforts are ongoing to meet the target of raising £100,000 by the end of the year, with donations contributed by businesses and the public are being asked to donate to the campaign if they can.

Rob Cookson, Deputy Chief Executive at LGBT Foundation, said: “We would like to extend a huge thank you to the VLBA for organising this fundraiser and for all those who have generously contributed to the fantastic amount raised so far.

“It is amazing to see the total reach £60,000, and we are hopeful with the fantastic support of our community and allies we will reach the £100,000 target, which is urgently needed to allow us to carry out our life-changing work for the LGBTQ+ community.

“These donations will ensure our Safer-Sex programme can continue to be delivered and will allow us to continue our work, alongside our partners at George House Trust to support the LGBTQ+ communities and people living with HIV.”

Last year marked 40 years of the HIV response and the whole Gay Village getting behind the life changing work of ourselves and LGBT Foundation recognises the genuine need that still exists and the Target £100k Fundraiser shows exactly what can be achieved by working together.”

Phil Burke, Chair of the Village Licensed Business Association (VLBA), added: “We would like to thank everyone who has kindly donated towards this vital cause, without the businesses and community coming together this would have been impossible to achieve.

It show great community spirit helping charities that are so close to the heart of Manchester’s  LGBT+ community.”

You can support the fundraising campaign by donating here