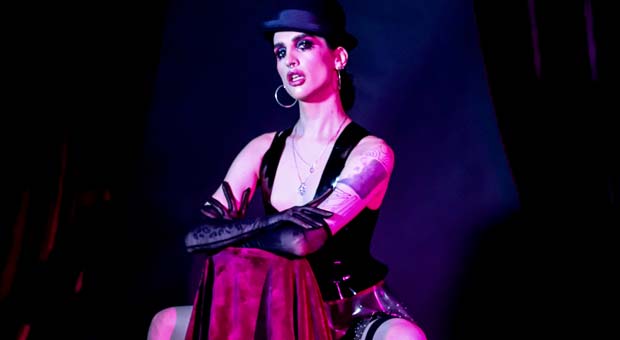 “Come to the Cabaret” at Band on the Wall

As part of the BFI  Musicals season Make A Scene brings the classic film set in 1930s Weimar Germany to life with modern drag and vogue performances asking the prescient question…what would it be like living in a country that’s becoming more and more dangerously right wing? Expect raucous performances from hostess Grace Oni Smith as Sally Bowles, songstress Beau Blonde plus Darren Pritchard and his vogue house The House of Ghetto as the EmCee and Kit Kat Club girls mixing vaudeville with vogue ball dance tracks. It’s a party that’s part 1933 part 2020, part film screening, part club night. You’ve never seen the film like this before!

There’ll be a full screening of the film interspersed with dazzling queer cabaret performances inspired by the seedy underbelly of Berlin nightlight now and then. You’ll be asked to come dressed to the nines in black tie and party dresses as if you were patrons of the Kit Kat Club. The bar will be serving crisp martinis, sidecars and Sally Bowles’ favourite drink – a prairie oyster.

Manchester’s own Make A Scene have made their name with sell out “way-too-interactive”  screenings of camp and queer classic films including a Flower Arrange A Long Little Shop of Horrors and a 60’s inspired Dance A Long screening of Hairspray. Live Cinema UK is the country’s only organisation focused on creating amazing experiential cinema events collaborating with artists including DJ Yoda, Norman Jay MBE, and Asian Dub Foundation, alongside a variety of digital, VR and performance artists to bring films to life with immersive projections and live scores.

The show will begin in Manchester at iconic venue Band on the Wall, take in Liverpool, Huddersfield, Newcastle and Lancaster and ends in a final performance at the Queen’s Film Theatre in Belfast.

The Manchester screening takes place on Friday 10th January 2020 at 19.30 at Band on the Wall. Tickets £15+ booking fee via the link below for tickets for the rest of the cities and more information go to www.makeascenefilmclub.com