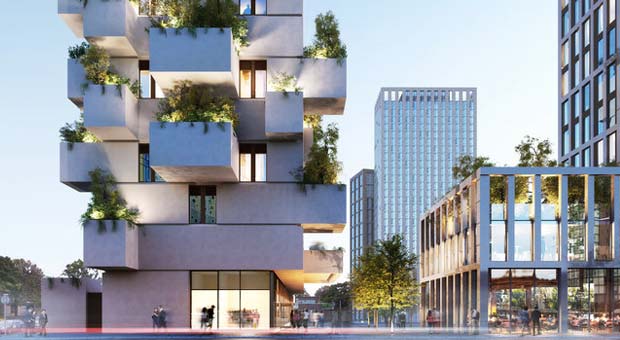 CAPITAL&CENTRIC has this week completed a funding agreement with the Greater Manchester Pension Fund to finance the construction of its 275 bedroom hotel, while also confirming Bowmer & Kirkland as the main contractor. The works are expected to start in the summer, subject to coronavirus restrictions being lifted.

CAPITAL&CENTRIC has previously announced that the hotel on Adair Street will be acquired and occupied by the Fattal Group following completion. The hotel is located in Manchester’s emerging Piccadilly East district and will operate under Fattal’s Leonardo Hotel brand. The completed 4 star hotel will create 90 full time jobs. The £35.5m project is expected to be complete in early 2022.

The 110,000 sq ft hotel, located on the corner of Adair Street and Great Ancoats Street, will span 14 floors. Planters will adorn the side of the Jenga-inspired hotel to provide a crescendo of greenery. The hotel will have a ground floor restaurant, bar and external terrace area that will spill out onto a new public square, which CAPITAL&CENTRIC will build for the City Council as part of the development.

The hotel, designed by Stephenson Studio, has been praised for its ambitious and eye-catching design, having won the President’s Award at the Manchester Society of Architects awards.

Tim Heatley co-founder of CAPITAL&CENTRIC said: “In these difficult times it’s even more important to be pushing ahead with our Adair Street hotel. It’s going to be a striking new addition to Manchester’s skyline and an anchor development in the Piccadilly East neighbourhood.

“With residents due to move into our Crusader and Phoenix developments later this year and plans for other homes in the area this is going to be a thriving new part of the city.  We’re also creating a new public square flanked by a cafe bar, providing some much needed outside space that anyone can enjoy.

“Yes, everyone’s been hit by the shock of Coronavirus, and we’ve recently set up our building opposite the Mackie Mayor as an emergency supplies depot. Manchester will bounce back and these deals are a positive reminder of how resilient our city region is.”

Gareth Conroy of Avison Young, property fund managers to the Greater Manchester Pension Fund said: “Times are tough but it’s important that we look to the future and plan for when the crisis is over. This hotel is an ambitious, high-quality project which sets the bar high for development in the City.”

The Piccadilly East neighbourhood behind Piccadilly train station is becoming a hive of activity and was recently picked as one of the next greatest places to live.  Social impact developers CAPITAL&CENTRIC are due to complete their Crusader Mill and Phoenix developments this year, both providing homes for owner occupiers in the city.

CAPITAL&CENTRIC and Kamani Property have opened a COVID-19 emergency supplies depot in Manchester’s New Cross, opposite the Mackie Mayor food hall and Band on the Wall.

The partners have been working up plans for the disused site in New Cross, which was purchased earlier this year. In the meantime, they’ve spruced up the buildings and opened the doors to businesses who can help Greater Manchester’s most vulnerable and disadvantaged people.

It’s part of the appeal launched recently by the Greater Manchester Mayor’s Charity for essential supplies including, food, such as cereals and microwaveable meals, toothbrushes and toothpaste, soaps and wet wipes, and even white goods and IT equipment so those in isolation can keep in touch with the outside world. The list of essential supplies are on the Greater Manchester Mayors Charity Website https://www.gmmayorscharity.co.uk.