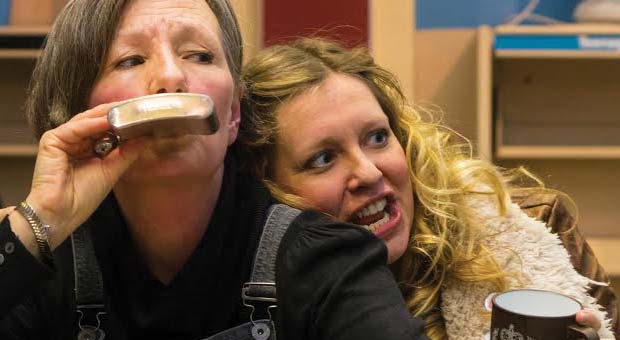 In the 1970s, Burnley was one of the UK’s battleground for LGBTQ+ rights, with a ground-breaking employment battle being fought there in 1978.   That battle is dramatised in the acclaimed play Burnley Lesbian Liberator by Abi Hynes.  First staged in 2017 to five star reviews, the play is returning for one night only as a rehearsed reading with the original cast as part of Queer August, an evening of free LGBTQ+ art and politics, at the Manchester Central Library on Friday 23rd August from 6pm.

Burnley’s Lesbian Liberator, by Abi Hynes, dramatises the political activism of Mary Winter, a bus driver who was sacked for nothing more than wearing a ‘Lesbian Liberation’ badge and was unsupported by her trade union.  She fought back against her employers in 1978 using a network of women’s groups across the UK, and staging a demo outside the Burnley Bus Station, one of the first of its kind on this issue.

• “5 STARS….made memorable by the use of humour, and shone a light on historical events which might otherwise have remained unsung.” - Remotegoat

• “It cannot be underestimated the effect these lesser-known working-class northerners had on the path of LGBT rights.” – Canal-St

“This is typical of the often little known but crucial events in UK LGBT history.  These are the watershed moments of resistance, of self-assertion and collective organisation.  These are the moments when we as a community first stood up in public and said, ‘NO’  The dramatisation of these stories brings to life the struggle that all minority communities have gone through to gain their rights.”

This rehearsed reading is performed at the Manchester Central Library on 23rd August 2019 as part of an evening of events called Queer August from 6-8pm. It has been funded by Manchester Council but organised by local activists and trade unionists in the queer/labour movement.  Tickets are free, but need to be booked  via the link below