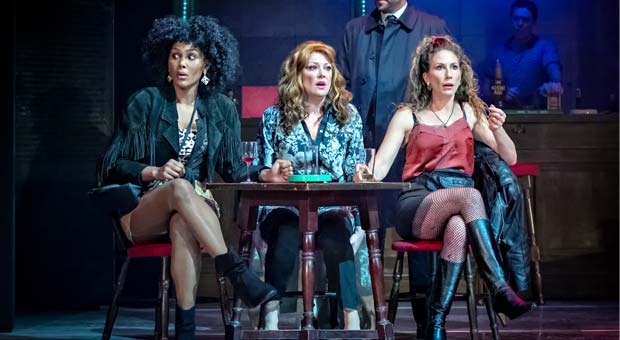 The TV phenomenon “Band of Gold” is being rebooted for the stage this January.

Kay Mellor’s iconic TV show, which had over 15 million weekly viewers has been adapted by the writer herself, and includes an all-star cast including Shayne Ward, Laurie Brett, Kieron Richardson, Gaynor Faye and Andrew Dunn.

The show is due to arrive to The Lowry theatre January 21, and Shayne Ward, who won the second season of X Factor says the he’s excited for Northern audiences to watch.

“I just can’t wait for the Manchester audiences to see it, because it’s a powerful story. Through the hard times, we laugh, and I’m glad we have that in us.

“In the hard times of the play, somewhere or another a joke will get through, and that is true of northern people.”

Kay Mellor based the stage version in the 90s like the original television programme. She revealed that this is because she thinks “nothing has changed” in the twenty years since the show aired.  Shayne commented on the decision to base it in the 90s.

“There’s no point making it up to date just to show the changes because, it’s still going on. (Sex workers) are still being discriminated against, being told they shouldn’t be doing what they’re doing.

He joked: “At least because it’s the 90s, we have to wear high-waisted trousers and big shoulder pads. I have a goatee too, I’m 35 and I’ve never had a goatee!”

Kieron Richardson of Hollyoaks shared that as a child his father, who was an on-set security guard, and took him on to the set of Band of gold, where he would ‘playhouse’ on the set.

“My dad used to work on sets, and one weekend he took us to Band of Gold. We would sit in all the fake houses playing.

“It’s bizarre because now I’m in the stage version. In a way it’s come full circle, so it’s surreal.”

Richardson plays Steve, the prime suspect in Gina’s murder. He revealed that Gina’s murderer is different from the TV show and thinks that audiences will enjoy the change in script.

He said: “Audiences can sit there and be like ‘I think it’s this person or I think it’s that person.’ It’s nice no one knows who the killer is and you’re trying it figure out who it is.”

Despite the changes to the script, Richardson confirmed that there are still some nostalgic nods to the show.

“Straight from the get-go, the old theme song is played, the hairs on the back of your neck stand up. You’re transported straight back to the 90s and to Band of Gold.”

‘Band of Gold comes to The Lowry from January 21 – 25, order your tickets via link below