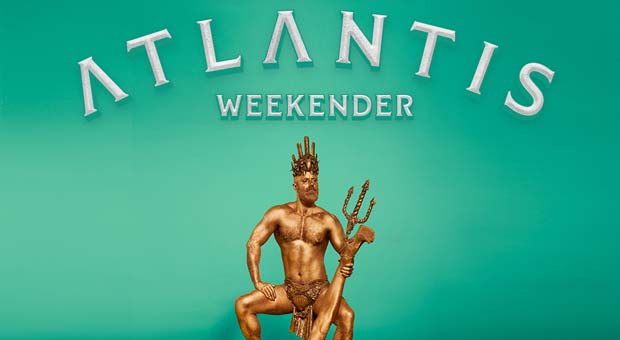 The Ball of Atlantis

Dr. Ranj is a NHS clinician, resident doctor on ITV’s This Morning, co-presenter of ITV’s Save Money Good Health, and co-creating presenter of BAFTA award winning CBeebies’ show Get Well Soon.  He was a contestant on BBC1’s Strictly Come Dancing 2018 and subsequently took part in the nationwide arena tour.  He is also a Sunday Times best-selling author and health columnist for Attitude magazine. Liverpool’s “sassiest drag queen” The Vivienne  is soon to make her name on RuPaul’s UK Drag Race having already been crowned the show ‘s UK Ambassador. This is her 3rd Vogue ball as Judge. Renowned and internationally acclaimed Voguer Avi’ance Urrutia is a former Prince of the legendary House of Milan and Father of the House of Yamamoto. He will also be giving a masterclass on “new way, hand performance and old way vogue” on the Friday before the ball. Completing the judging line up is Liverpool fashion expert Gordon Webber who works all over the world on photo-shoots and costume creations.

The House of Suarez Vogue Ball – where club culture meets high art - is a key annual event in Liverpool’s cultural calendar. Expect flamboyant and fantastical realisations of the Atlantis theme, as Houses from Holland and across the UK come together to compete for catwalk supremacy reminiscent of 1970s and ‘80s New York. Categories in contention at this year’s celebration of global vogue culture include: Fantasy, Solo, Lip Synch, Sex Siren and Choreography.

The Ball of Atlantis is part of an Atlantis Weekender kicking off on Friday 18th October, with an Elements of Vogue event at The Black E, Liverpool. This platform celebrates the up and coming voguers and dancers of the future. Groups of young performers from across the region and nationally come together to perform alongside professional artists fusing vogue, commercial and contemporary dance pieces also inspired by the theme of Atlantis, paving the way for the excitement of the main event on Saturday night.

During the day on the Friday, special guest judge – Avi’ance Urrutia – leads a master class from 5.3pm for ages 8+ at the Black E teaching the fundamentals of Vogue including hand and new wave vogue dance styles.

Now in its 11th year, the Vogue Ball is run annually in Liverpool and more recently in Manchester by House of Suarez – the Liverpool based vogue dance Company run by dancer, teacher, choreographer and director Darren Suarez.

Darren Suarez comments: “This year’s ball is bigger and brighter than ever featuring our fantastic line up of judges and brilliant competing dancers old and new, flamboyant costume designers and some of the best vougers and choreographers around who I know are going to pull out all the stops to be as outrageous and outstanding as possible. Liverpool is in for a real treat and I cannot wait for the weekender to begin.”