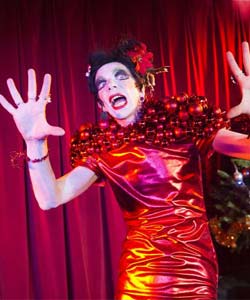 Yule be Sorry with David Hoyle

This night of high comedy, song and dance began with David in his first costume for the night, a fabulous Rick Owens robe. He welcomed us, his family for the evening to the show in his own unique way.

Against the backdrop of the perfectly formed, but still intimate Home Manchester theatre, what ensued was an onslaught of audio visual delight. Yule Be Sorry was a mixture of intergalactic costumes, on point messages, harmless audience participation and a lot of make up. Each act offered something different and uniquely theirs, all blended together to form a perfect mix.

Whether it was Jonny-Woo’s razor blade take on Mary Portas, Bourgeois & Maurice’s uber stylish, dark and satirical musical offering, which included a tribute to stars lost in 2016 or David’s live on stage portraiture, this alt-drag / alt-reality event was a night to remember.