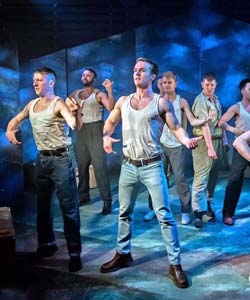 Yank is a clever and canny musical, as it presents a love story set against the backdrop of World War 2; nothing new there then, you might ask. But it is presented in the style of a Rogers and Hammerstein piece, filled with angst and humour, as we follow two soldiers who fall in love at a time of division and prejudice. Post Trump, does this sound familiar? The times we are currently experiencing make the piece just as relevant, today.

Joseph and David Zellnik’s original piece focuses on the closeted and unsung heroes of war. And James Baker has manged to convey a good sense of period, throughout. This is big, and bold theatre on a budget. But, again it feels as if the Hope Mill Theatre is living up to the image of Manchester’s Menier, which began to get noticed when Parade was staged here to great acclaim.

This piece is not quite in the same league as that production, but it comes fairly close thanks to the sterling efforts of Baker, who pushes his cast to the maximum limits, and it pays huge rewards for the audience, as you really find yourself connected to the show.

Scott Hunter’s Stu is enigmatic, geeky, gawky and this brilliant actor captures the feel of a gay man who does not feel a sense of belonging, and he does this through his expressive body language, and he sings superbly. Barnaby Hughes is suitably impressive as Mitch, and he comes into his own in act two, when his emotions take over; behind the façade is a broken heart. Chris Kiely exudes experience as confident Artie, and you cannot take your eyes off him.

Sarah-Louise Young plays a series of tokenistic women, and she is superb and gives far more than is on the page. I would have liked to have seen more fully defined women in the original piece, but she lifts what she has, with creative comic timing and velvety vocals.

Luke Bayer also stands out in a small but perfectly formed role, and like Sarah-Louise he knows how to play with the audience. Chris Cuming’s choreography is out of this world, for such a small stage, and he does not shy away from the task. The tap sequences recall the recent Oscar winner La La Land, as this is pure technicolored magic, and he deserves all of the praise coming his way, as does the talented supporting cast, as each and every one of them deliver.

Yank might have a touch of Miss Saigon’s earnestness at times, and the first half is a tad too long, but the Zellnik’s have created an original and stimulating piece of history, and Baker and his team have not dropped the ball, because Yank is another winner for the Hope Mill Theatre, and a star is born in Scott Hunter.