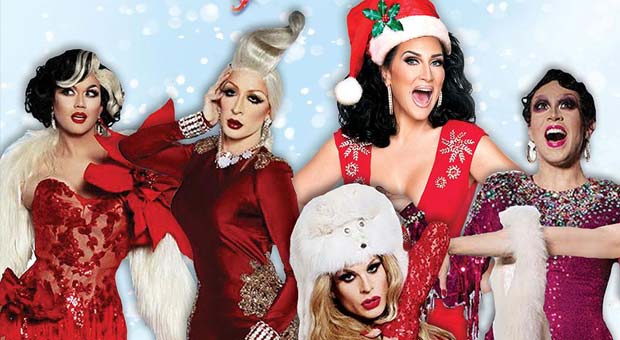 Xmas Queens at the Academy

You might think it would be difficult to make a space like the Academy feel cosy and Christmassy, well I can tell you all it takes is about five Christmas trees, a gazillion sequins, a ton of lip gloss, six of the best drag queens in the business and the wonderful Michelle Visage.

Yes, Christmas Queens came to Manchester on Thursday night and did not disappoint. It was easily the best Drag Race show I’ve seen. The show started and featured other RuPaul Drag Race alumni appearing on the video screens answering all sorts of questions such as whether they are naughty or nice and they all got massive cheers from the up for it Manchester crowd. But it was the stars on the stage that everyone was really interested in.

Visage ably played the host, making it feel like it was just a regular gathering at her house, opening the show with a wonderful speech about acceptance and equality and even inviting audience members up onto the stage to lip sync for their lives which was brilliant.

The opening number got us right into the mood with a medley of Christmas favourites reworked in Drag Race style.

Season Five winner and Manchester regular, Jinkx Monsoon was a brilliant soloist, her voice is spectacular and she was born for that stage. She performed Passive Aggressive Christmas from the Christmas Queens 2 album and it was so funny.

Ivy Winters came out in a beautiful cloak for The First Noel and then an amazing triple reveal present outfit for Happy Holidays.

It was interesting to see some of the queens who don’t often visit these shores like Thorgy Thor. I wasn’t a massive fan of hers in season 8 but she most definitely brought something different to the proceedings by getting her violin out and blasting a couple of numbers to us, one assisted by the new kid on the block, Peppermint.

You could be forgiven for expecting Peppermint to be a little nervous with such big names but when they did the icy karaoke section she took on Madonna’s Frozen in front of the Queen of Pop’s biggest fan, Michelle Visage. Anyone who saw Peppermint’s lip sync to Music on season 9 knows she’s in safe territory.

The other Drag Race royalty in the house was season four winner, Sharon Needles. I have to say that she did look a little out of the place with her gothic look and her performance of The Murder of the Lawson Family was a bit of a low point.

For me the star of the show was Ginger Minj. She was fantastic, playing the comedy card and then switching into chanteuse, looking fabulous in a red sequinned number. She totally owned the stage and was perfect foil for Jinkx as they belted out that song from Frozen which I’m not going to name because I will be singing it for the rest of the day and so will you. She was the one to watch in the group performances too and was so at ease.

Michelle didn’t just host but treated us to a rendition of Silent Night which the brilliant Manchester crowd sung at the top of their voices before we all finished on a karaoke version of Joy To the World amid snow cannons and much cheering.

I challenge anyone not to leave feeling totally in the Christmas mood with a ridiculous grin on their face. If you get the chance, go!