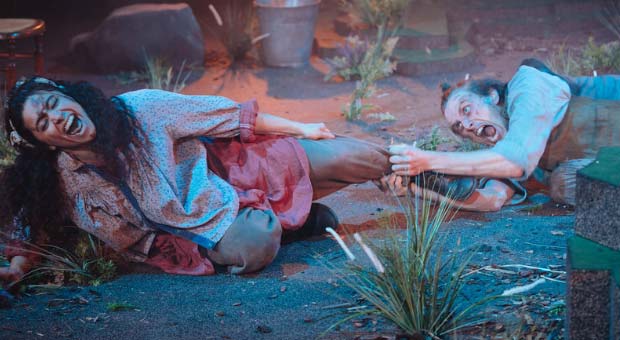 In a new adaptation by Andrew Sheridan

Emily Bronte’s extraordinary novel Wuthering Heights has always unleashed a love that was raw and uncontained, wild, brutal and all-consuming. Therefore, it is no surprise that the first aspect that strikes you about this production is the earthy feel and harsh desolate environment of the wiley windy moors. Created by Cecile Tremolieres, the staging certainly hints that you are in for something really special and I think that Bronte would have been very proud of this.

In this new adaptation by Bruntwood Prize winning writer Andrew Sheridan, Cathy and Heathcliff are seen afresh as unpredictable as the moors and bound by an energy that is palpable. The twists and turns of Bronte’s exhilarating, poetic narrative is portrayed with such astonishing imagination that you cannot take your eyes off the stage. A ferocious exploration of passion and desire, underscored by live, original music, Cathy and Heathcliff’s love finds a visceral and vicious, tender and true connection in this new production.

For Bryony Shanahan, this is her first outing as the theatre’s new joint Artistic Director. With this production she has created something that is contemporary, unique and energetic. If this is what the future will look like at the Royal Exchange, then the theatre is in for an exciting time ahead.

The cast are great. Playing Heathcliff is Alex Austin. How he takes his character from the innocence of childhood to the violent, sinister, jealous and controlling lover shows a maturity beyond his years. With Rakhee Sharma as Cathy, this is indeed a very solid debut for her and as the production draws to its conclusion, the all-consuming nature of the love she has for Heathcliffe is depicted brilliantly. Dean Fagen plays a measured Edgar, but it is Gurjeet Singh who really brings to life the strong themes of isolation in his dark, jealous and often sinister portrayal as Hindley, Cathy’s brother.

Like a stroke of genius, the cast are joined on stage by the superb musical talent of Sophie Galpin and Rebecca Wilkie. Music is integral to this production and you cannot help but be deeply moved in many different ways by the soundscape. The sound designer and composer, Alexandra Faye Brathwaite, has done an extraordinary job in allowing the audience to feel how the characters feel and this brings the emotion to life. It is so good I want the soundtrack!

It’s productions like this that make me proud to live in Manchester. Bronte’s purpose of writing Wuthering Heights was to describe a twisted and dark romantic story. This production brings this to life with astonishing creativity.

Love is pain. Love is melancholy. Love is tumultuous.

WUTHERING HEIGHTS runs in the theatre from 7 February – 7 March 2020.