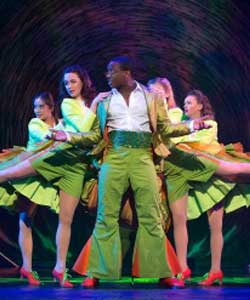 Currently on its European tour, this big musical opens on a dreary high rise apartment block where we find Alice (Kerry Ellis) lamenting the loss of her keys, car, job and ex-husband – topped off by the most depressing fact of all: she’s turned 40. In the powerful opening number Worst Day she clearly tells us the real world is not where she wants to be. Cue random appearances of a white rabbit (Dave Willetts), a defunct elevator and a spiralling journey to the psychedelic world of Wonderland.

Accompanied by her daughter Ellie (Naomi Morris) and geeky neighbour Jack (Stephen Webb), Alice explores this world of unreality, encountering the iconic characters of Lewis Carroll’s books and the transformational properties of the looking glass.

There are faultless performances across the board – you’d expect little else from (and will not be disappointed by) musical stalwarts Ellis and Willetts, but it is Natalie McQueen who shines brightest as the female Mad Hatter. From timid to spunky, she relishes every moment and delivers with balls and a voice to match. I Will Prevail is a belting opener to Act Two, and, in a tied battle of the power vocals, her duet with Alice – This is Who I Am - steals the night. Wendi Peters, in her far too brief appearances as the Queen of Hearts, is hilarious as she chomps her tarts and camps it up as a Belinda Scandals doppelgänger.

With a talented band to match the power of the vocals, this phantasmagorical wonderment of Wonderland is not to be missed.