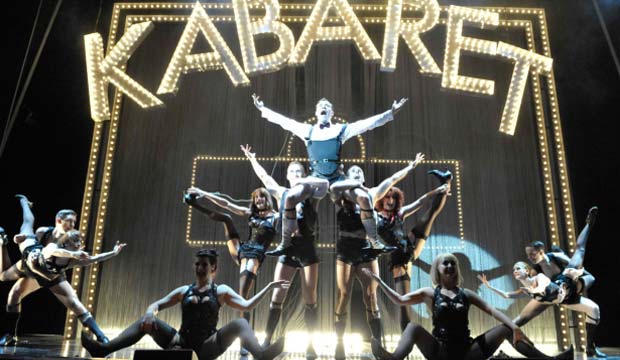 Will young stars in Cabaret at The Lowry

Hush up, don’t tell mama, but Will Young and Louise Redknapp are really rather good in this latest touring production of Kander and Ebb’s classic musical, Cabaret.

Young plays the Emcee, and because he has played this part countless times now, he has fun and has really embraced the darkness of the show. The hills are not alive with the sound of music, this is an anarchic play with songs, as opposed to a sung through musical designed for M&M munchers.

Welcome the Kit Kat club where anything is possible. Enter naïve American Cliff Bradshaw (the brilliant Charles Hagerty) who is about the have his life turned upside down, in ways he could only dream of. He meets the posh diva Sally Bowles (a confident Redknapp) and she teaches him things he could never learn at school.

With a magnificent ensemble, who do more than support, and Katrina Lindsay’s dark and economical set design, the stage is set for fun and frolics, featuring Javier De Frutos’s dazzling choreography, but darkness looms, as soon as we see the Nazi Flag.

Susan Penhaligon and Linal Haft have such beautiful chemistry as the older couple, thrust into this new beginning, founded on prejudice and they are remarkable, as they manage to convey such sweetness and hope, despite the fact they know this won’t end well.

Charles Hagerty is equally as good, as the innocent abroad, and he is ably supported by Basienka Blake, as his neighbour Fraulein Kost, who has more visitors than Aldi on Christmas Eve.

Young, chews the scenery and has a ball as our host and guide. Redknapp brings genuine emotion to the likes of Maybe This Time and Life Is A Cabaret and she hits all the right notes. She is assured in the acting department, also. Although, at times, her inexperience shows when acting alongside some of the pros who have acted on TV, Film and Theatre. But, she embodies the eccentricity of Bowles and she and Will Young connect on many levels.

Don’t Tell Mama is relegated to a background song, and this is a shame as it is a show stopper and parts of the show feel disjointed, due to the varying pace of each scene, full throttle or slow and dark. But, having two people who have earned their living singing pays off, as each number has life and vitality and the ensemble then kick the show into touch with their marvelous moves (take a bow, Luke Jackson!)

Cabaret is at the Lowry until 11 November