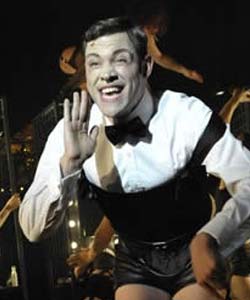 Will Young in Cabaret

Cabaret has arrived at the Manchester Opera House, which is showing until Saturday 14th September.

Will Young reprises his role in Rufus Norris’ acclaimed production of Cabaret, following its successful run in the West End.  Will plays Emcee, the wonderful host to the evening.  Will plays the character as if it was made for him.  He draws you in, makes you laugh, feel sorry and fall in love.  Watch closely, as Will Young's facial expressions are truly amazing and complete the character so well.  Will Young cannot be praised enough for his truly excellent acting ability, his bohemian style and world famous singing voice that truly make this character.

Siobhan Dillon joins the cast as the iconic Sally Bowles, theatre veteran Lyn Paul will play Fraulein Schneider, with Matt Rawle (Cliff), Linal Haft (Herr Schultz) and Nicholas Tizzard (Ernst) returning after great acclaim in the West End.  Each character is portrayed to perfection.  It is no wonder such a wonderful production continues to run and really makes going to theatre worth while.  All actors play their characters with such passion, you cannot help but be drawn into this story.  They will leave you wanting to return and watch it all over again.

Cabaret features show-stopping choreography, dazzling costumes and some of the most iconic songs in musical theatre including Money Makes the World Go Round, Two Ladies, Maybe This Time and of course Cabaret. The production turns Weimar Berlin of 1931 into a sassy, sizzling haven of decadence. And at its dark heart are the notorious Emcee and sassy Sally Bowles, who perform nightly at the infamous Kit Kat Klub.

Nearly everyone has heard of Cabaret, and this was the first time I had seen it.  I was truly blown away and it made me love the theatre all over again.  This is one production that simply cannot be missed.  Well worthy of its standing ovation, the show deals with real issues with humour, romance and poignancy.  It is a prime example how real life lessons can be learned through the theatre.

Since its Broadway premiere in 1966 and the renowned movie version with Liza Minnelli and Joel Grey, Cabaret has won a staggering number of stage and screen awards including 8 Oscars, 7 BAFTAs and 13 Tonys.  It is not surprising the show has run since 1966 and will continue to do so for many years, as relevant, inspiring and truly fantastic as when it first started.

For more information and to book.