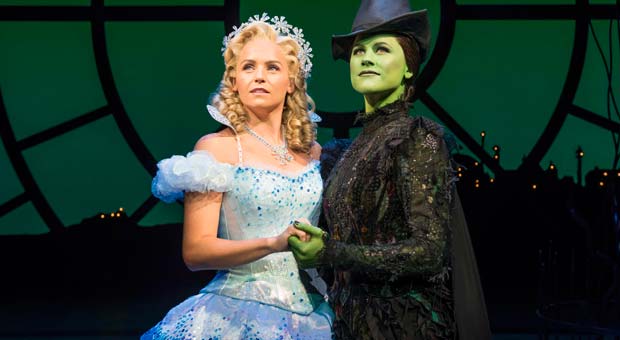 Wicked returns to the Manchester stage

It is hard to believe that 10 years ago when Wicked first arrived in London that it was met by mixed reviews with some critics describing the production as overblown and the songs forgettable. It is safe to say that this particular play has defied the odds or gravity if you like to be what I consider one of the best plays that I have ever seen.

It goes without saying that when the Palace Theatre announced that there would be a run of Wicked there was a lot of hype. It is not difficult to see why upon seeing this show for the first time. The production is extraordinary and the performances magical. For those who don't know the tale, it tells the untold story of witches in Oz. We are shown the journey of Elphaba, the 'Wicked' witch played by Amy Ross and Glinda, the 'Good' witch played by Helen Woolf. Elphaba is an extrovert but one with incredible magical talent whereas Glinda whilst incredibly popular is at fairly mediocre and vein.

The two become friends whilst attending a Harry Potter style university and Elphaba becomes determined to meet the Wizard to write some of the wrongs of Oz. Upon eventually meeting the Wizard she discovers her expectations were too high and the Wizard is behind the nefarious goings on throughout Oz. In disgust she becomes a fugitive and cast as the villainous Wicked Witch of the West whilst Glinda becomes duplicitous in the regime though not entirely agreeing with it in order to give the people of Oz hope.

Wicked brings in many of the elements from the beloved film, The Wizard of Oz but with many a twist along the way. The play whilst funny and filled with beautiful songs asks the questions on whether evil is born or something people become due to the society around them? It asks you to consider that history is so often told by the winners and that there are two sides to every story.

As person who attends the theatre I honestly can say that this is one of the best productions I have ever seen, everything from the set design to the acting to the songs. This is a play that knows it audience and knows how to leave an impact and something that you will think on long after you have left the theatre.

It is not difficult to see why Wicked is now so beloved by audiences and by critics alike with a huge production and a refreshing take on the popular film that came out in 1939. Wicked has gone onto win over 100 international awards and been played to audiences all around the world. This is the 6th time that the show has played at the Palace in Manchester with thousands of tickets sold in this run alone. The tour is in Manchester until the 5th January and if you can get the last remaining tickets we strongly encourage you to do so.