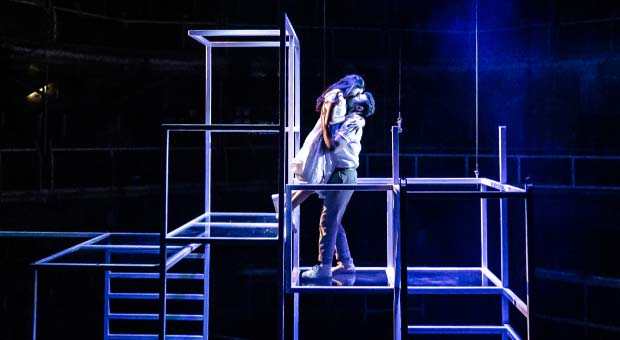 West Side Story at Royal Exchange

West Side Story is a huge musical with classic songs and iconic dance routines. In its original production, Jerome Robbins offered a modern take on the classic Romeo and Juliet story, pitting two New York gangs – the Sharks and Jets – against each other. This was an era of racial tension and knife crime. 60+ years since the original, Sarah Frankcom directs a new production for the Royal Exchange.

Anna Fleischle’s impressive design successfully strips back the streets of New York to a stark, skeletal framework, with three rows of seats removed to make space for the large cast and company dance routines. Despite the increased stage size, the Royal Exchange is still a confined space for such a large show, requiring new choreography from Aletta Collins – a brave decision that doesn’t quite hit the mark. Routines may make the most of the stage available, but there was no edge - these should be stylised moments of tension that capture the frustrations of the young gang members. The sluggish first act finally finds its feet with the pre-interval Rumble and continues apace in the second half with the light relief of Gee, Officer Krupke and the beautifully staged Somewhere. Jocasta Almgill is excellent as Anita, standing out amongst more reserved performances; Andy Coxon (Tony) and Gabriela Garcia (Maria) portray the young lovers with enthusiasm, but the emotion of previous versions of the show was missing. However, Jason Carr’s 12 strong orchestra are the stars of this production with their perfect interpretation of the original score.

The powerful music guarantees an enjoyable evening, but this feels like a missed opportunity to bring the story bang up to date with gang culture and knife crime currently so prevalent in the news. The poster suggests a 2019 Manchester setting, but Frankcom’s interpretation feels more pretty than gritty.