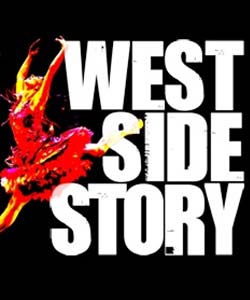 Wednesday evening and your Canal Street Correspondent was transported to New York City in the mid-1950s (via the Palace Theatre), attending the Manchester run of West Side Story. Since it opened on Broadway in 1957, West Side Story has become one of the most successful stage shows of all time. Its reception here only confirmed its enduring popularity.

With ground breaking choreography by the legendary Jerome Robbins, book by Arthur Laurents, an unforgettable score by Leonard Bernstein and lyrics by Stephen Sondheim, West Side Story changed the face of musical theatre for ever. It was inspired by William Shakespeare's play Romeo and Juliet. West Side Story remains timeless.

This production of the classic musical is directed and choreographed by Joey McKneely, a former assistant of the show's original director and choreographer Jerome Robbins.  For a show that is over 50 years old, this production is up with the very best of musical theatre, with fantastic costumes, lighting, music and incredible dance routines, not to mention the amazing vocals.

The story is set in the Upper West Side neighbourhood and explores the rivalry between the Jets and the Sharks, two teenage street gangs of different ethnic backgrounds. The members of the Sharks from Puerto Rico are taunted by the Jets, a Polish-American working-class group.  Tony, one of the Jets, falls in love with Maria, the sister of Bernardo, the leader of the Sharks.  The consequences are fatal.
A strong cast are headed by Katie Hall (Maria) and Louis Maskell (Tony). Maskell glides effortlessly through his tenor register in the iconic 'Maria.' Hall's vocals are crisp and clean.  The pair makes for believable fated lovers.

Good too are the ensemble cast, who make up the two rival gangs: the Sharks and Jets. The dancing is superb. The pace moves quick as the story unfolds, chasing from one scene to the next. It builds up to some spectacular moments that are explosive in colour and sound.

Special mention to Djalenga Scott for her fiery and utterly believable portrayal of Anita, and Jack Wilcox as Riff who showed considerable singing and dancing skill.  Javier Cid certainly can certainly dance, he needs however to work on his characterisation as Bernardo.

Clever use of lighting, stupendous set design by Peter Halbsgut and choreographer/director Joey McKneely's dynamic touches make for a show that is simply astounding and visually arresting.