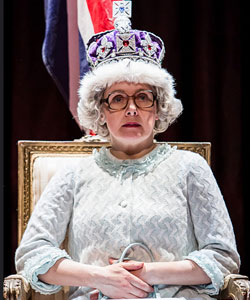 We want you to watch

We Want You To Watch by Rash Dash and Alice Birch.
The Lowry, Thursday 22nd Oct.

When offered the chance to review a performance commissioned by the National Theatre at The Lowry, I must say the blurb of We Want You To Watch by Rash Dash and Alice Birch, piqued my interest no end. The particular mention of 'the Queen' talking about sex and issues surrounding hardcore pornography, it was certainly not going to be a performance for the faint hearted.

As we entered the intimate setting of The Studio at The Lowry, we were duly warned of an impending loud bang during the performance and if we were delicate of hearing, to take due precaution. This safely set the bar for what was a loud, confronting and thought provoking piece.

Cutting straight to the quick, the audience were immediately thrust into a fictional world where a man with an unashamed thirst for depraved pornography is questioned by two women (Rash Dash) over the murder of young woman. The graphically horrific, sexually motivated injuries inflicted on the female victim, echoed the violence in the pornography the suspect admitted watching on a frighteningly frequent basis.

Fictional it may be but you only have to turn on the news this week to see this has a depressingly firm grounding in reality. With sexually motivated crimes on the rise, this performance asks how much the ready availability of hardcore, often violent pornography is having on society.

Joined by an ensemble of guest performers, the two women of Rash Dash delivered an energetic performance, injected with a scattering of pop-culture, sexualised dance routines in a nod to the wider issue of female representation in the media. In a segment where an officious female director demanded more sexuality from Rash Dash, it highlighted the rising issue of women themselves accepting their fate as products of the male gaze and perpetuating the problem.

The segment of the show which prompted the biggest post-show conversation for me personally occurred when a member of the cast sat centre stage on a picnic blanket dressed as a cherubic-looking school boy. Rash Dash provided poignant commentary on his life to come. They describe how in an act of seemingly playful playground cheekiness, the boy's friend whips out his smartphone to show him a hardcore porn video. However, such continued exposure to this dark, unrealistic world of sex then goes on to shape the boy's life in his subsequent approach to sex and women leading to a dark turn of events.

It's a pertinent issue in today's culture and disturbing to think that most young people's initial exposure to sex won't be through 'the talk' from parents or sex education at school but through hardcore material readily available online.

Amongst the darkness, there were lighter moments and I wasn't disappointed as 'the Queen' did indeed appear. In a wildly physical turn, she described through a cacophony of noises just how she likes her sex. There was of course a point to be made but it was as thought provoking as it was entertaining.

As the performance drew to a close, the end scene, which I won't spoil, was a suitably disturbing climax which left me not quite knowing what to look at or whether to look away all together.

In an era where feminism is becoming more mainstream and women across a variety of mediums are using their voice to shout against inequality, this show added another dimension to the mix. Questioning and challenging, Rash Dash say themselves that it may be small but it's the biggest thing they've ever done. Small it may be but no less important.

We Want You To Watch is part of a larger series of feminist works on The Lowry at the moment. Including shows such as Sirens, La Merda and the Revengers Tragedy and others that showcase great women. See www.thelowry.com for more information.