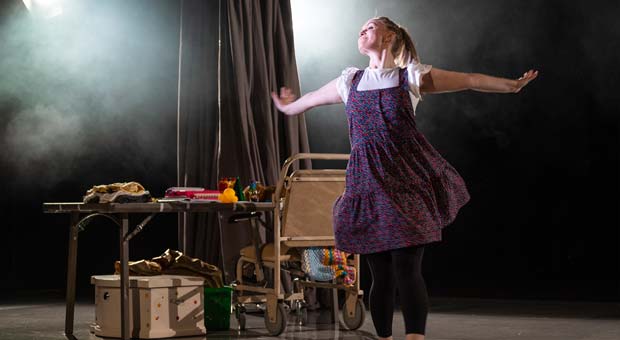 We Should Definitely Have More Dancing

We Should Definitely Have More Dancing opened at the Oldham Coliseum on Friday the 17th of June and runs until Saturday the 2nd of July. It’s the true and autobiographical chronicle of Clara, who replaces hedonism with heroism after a major tumour the size of a fist is found inside her head at the top of her spine.

There is a cast of 3: Clara Darcy as herself, with Shamia Chalabi and Suzanna Hamilton who take over as Clara at times but also play her parents and all other parts. It’s no spoiler to say that Clara lives to tell her tale as she herself is onstage in front of us telling it, which she does magnificently with fantastic support from Shamia and Suzanna.

Obviously the central character is Clara herself, who somehow manages to make order out of the chaos that was going on with and around her. In between the more harrowing events (particularly the surgery) there are lighter ones that prevent things descending into self pity, even though at the time she went through hell.

She takes the risks of the operation as a 50/50 chance of success rather than an identical one of failure, and the smaller details of those brief acquaintanceships that occur when in hospital for a long time were spot on. The Build a Bear episode was very good too, and the appreciation for the NHS that comes from the heart put us pot-bangers of a Thursday evening into the shade.

Just before the final soliloquy there’s a reference to a William Purkey song. The full verse is:

Amen to that, and although Latin is falling out of favour these days if there is a moral to this play it would be carpe diem before the diem carps you.

After Oldham the play goes on tour to Scarborough and Keswick.

This production marks the Oldham Coliseum Theatre’s debut at the Edinburgh Fringe Festival when it opens at Assembly George Square on August 3rd 2022.