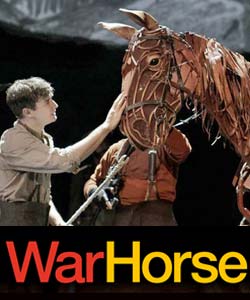 GALLOP ALONG TO WAR HORSE - A THOROUGHBRED PRODUCTION!!

Rarely has your Canal Street Correspondent been so moved by a show as by the multi award-winning National Theatre production of “War Horse” which has returned to the Lowy’s Lyric Theatre, running until September.

Nick Stafford’s play adapted from Michael Morpurgo’s best-selling 1982 novel of the same name was premiered at the National Theatre in 2007.  It met instant critical acclaim for its powerful use of life-size horse puppets designed by the Handspring Puppet Company of South Africa.  Quickly transferring to the West End, the production deservedly earned an Olivier Award, the Evening Standard Theatre Award and the London Critics' Circle Theatre Award.

Opening on the eve of World War 1 the play narrates remarkable bond between a man named Albert (Lee Armstrong) and his loyal horse, Joey.   War Horse follows the growing friendship between man and beast as Albert trains Joey.  Following a forced separation Albert follows Joey on an incredible journey across Europe and eventually to the Somme.

There is pain, there is destruction, but there is also comedy.  Along the way, Joey touches the lives of everyone he comes into contact with, including British and German soldiers, as well as French peasant farmers caught in the horror of war. In no man's land, Joey's extraordinary saga winds to a poignant and deeply affecting climax.

The production, directed by Marianne Elliott and Tom Morris is extraordinary. Set, lighting and original folk music combine in creating the peace of the Devon countryside, and effectively contrast the dark futility of war.  Lead human, Albert Narracott is played with emotion and unworldly innocence by Lee Armstrong. He is effectively supported by a strong cast, with strong performances by Stephen Hillman (Ted Naracott); Karen Henthorn (Rose Narracott); and, Marin Wenner (Friedrich Muller).

Many of the plaudits focus on the jaw-dropping mechanical horses. Bringing Joey to life takes incredible team work from three individual actors. Not only are they carrying 50 kilos of horse, they are responsible for the eyes, ears, tail and legs - all of which are emotional indicators, and what makes Joey so realistic.

This is a thoroughbred production, and theatrical event that should not be missed.