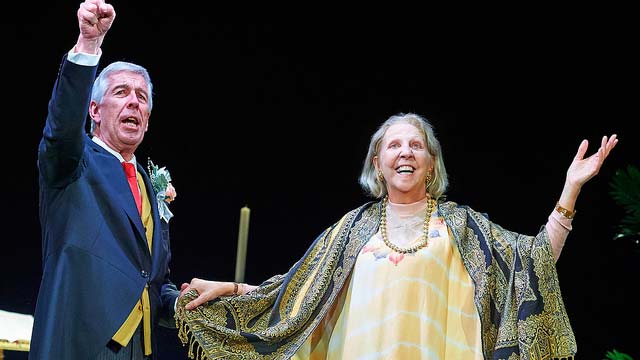 Waiting for God at The Lowry

Waiting for God, follows the likes of Dad’s Army and ‘Allo ‘Allo! as one of the latest TV to stage adaptations. Where this one differs slightly, is that It will please fans of the sit-com, without slavishly recreating scenes they have watched on their gogglebox, and it breezes along nicely.

Nichola McAuliffe is excellent as matriarch, Diana. She rules the Bayview Residents Home with an iron rod. But, beneath this fiery exterior, is a woman with a softer side, borne out during visits from her niece, played by Joanna Bending.

There is a subplot, involving two of the staff from the home, but the main draw for fans of the original BBC show, will be the relationship between Diana and new resident Tom, played by Jeffrey Holland. This coupling is at times beautifully drawn and Holland matches McAuliffe, as the two of them bring far more to the play, than is on the page.

There are points, when you may think what is the point in revisiting these characters on stage, given they had a relatively long life on TV. But, as each of us faces old age against a backdrop of headlines about the so-called dementia tax and benefits being cut, there is something refreshing about an experienced woman, who still has fire in her belly, who will not bow down, as she still has a good life to lead.

Director David Grindley injects pace into the piece, which comes in at under two hours, and the audience on the night I attended really enjoyed it, greeting the end with warm applause. And I am not surprised, as Waiting for God has enough sweet and sour moments to suit all palates, and is beautifully performed by the two leads.

Waiting for God is at the Lowry until 8 July.