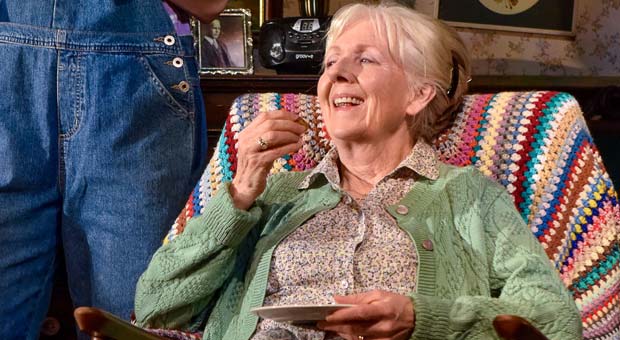 Visitors, by Barney Norris, is a chronicle of an old lady’s decline into dementia. It’s powerful. There are lots of laughs but these can’t prevent or disguise the seriousness.

There is a small cast of four. Edie and Arthur have been married for years. They still adore each other, and lead a secluded life on a remote farm in the wilds of Dorset. They have a son, Stephen, who visits sporadically and has arranged for Kate to move in and help Arthur care for Edie. The plural in the play’s title reflects Stephen being a visitor as well as Kate.

Without giving too much away, we see Edie’s slow, sure, but inevitable descent from mere forgetfulness – and the most heart-rending aspect is that she knows. Kate’s arrival allows a return to semi-normality as Arthur can look after the farm properly, knowing that Edie is also being looked after. As her decline continues, and she lapses in and out of lucidity, tensions between Arthur and Stephen – who has problems of his own – on the best way forward surface. Inevitably, hard facts have to be faced and the new status quo cannot continue.

Liz Crowther’s portrayal of Edie is magnificent, there is simply no more to say. Robin Herford (Arthur) as the adoring husband, shows real tenderness and affection without ever becoming mawkish. Kitty Douglas is perfect as Kate, balancing the happy go lucky with genuine care and concern. Ben Porter (Stephen) switches from the confident, successful business man of the world type, to relying on his father again in such a way that you can’t help feeling sorry for him – even if he has his own interests partially at heart.

The first act seemed quite short, but when the interval arrived it turned out to have been almost an hour long. The second act was the same, and towards the end of it Edie’s recital of her own life poem brought a lump to the throat.

I can’t say that this is a happy play, but I can say that it’s a celebration of how people triumph over adversity, and Barney Norris deserves the acclaim it’s given him.

Visitors continues at the Oldham Coliseum until Saturday 4th May.  Click here for tickets.