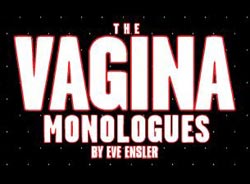 Eve Ensler's Vagina Monologues is a duel narrative piece of theatre, created from a series of interviews the writer conducted with many different women of all ages and experiences, about their private parts.

Manchester's Palace Theatre was host to this event with the well known soap actresses Wendi Peters, Louisa Lytton and Tiana Benjamin.  All three ladies held strong performances with a slightly uncomfortable audience, who, despite the notoriaty of the play, were shifting in their seats and unsure whether to laugh or cry or pretend they couldn't hear certain things.

Wendi Peters stole the show in the first half with her monologue 'The Flood', contrasting humour and sadness perfectly.  All three actresses showed geat togetherness and good humour in their semi ad-libbed interludes between the monologues.

The second half was much shorter, but the audience participation sections became more natural for both crowd and performers.  Louisa Lytton's orgasm scene was definitely a sight to be seen (and heard!) and was cleverly juxtaposed with a tragic tale of abuse told by Tiana Benjamin.

In all, an enjoyble watch, swinging emotions drastically and bringing forward the message that women aren't alone in any situation to do with their lady parts.

Now on tour,make sure you catch it next time around..