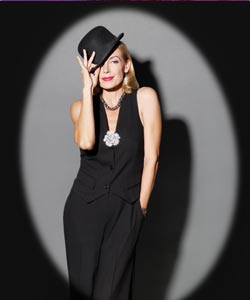 Ute Lemper doesn't merely sing songs; she performs them.
Last night in the wonderful RNCM on Oxford Rd, a packed house (of fairly mature couples, it has to be said) were treated to a rare performance by this internationally acclaimed Chanteuse .With Vana Gierg on Piano and Marcelo Nisinman on Bandoneon, Ute delighted and enthralled her audience for nearly 2 straight hours. The narrative started in 1928 and then weaved its way through periods of political upheaval. This took us not only on the journey from Berlin, Bilboa and Buenoes Aries in geographical terms but also musically. With songs carefully chosen to complement the storyline, Brell and Brecht, as you might expect, featured heavily. There were highlights for us of 'If you go away', 'The Port of Amsterdam' and 'Mack the Knife'.

Ute Lemper has been a major star of Musicals across the globe and she delighted the adoring house with an encore medley of songs from Cabaret and Chicago. The entire evening was also beautifully choreographed and contained moments of great wit and interaction with her audience members. In particular 'Fred'. My companion for the night speaks fluent German which aided me in further heightening my understanding of the story as it developed. He giggled a couple of times as if it were a private joke .Ute Lemper would not be everyone’ cup of tea' but who cares? She is beguiling, talented and very well worth catching the next time she is in town. I can’t imagine any other venue staging such an event and so well done RNCM for creating this memorable evening on an otherwise dull Thursday in Manchester.