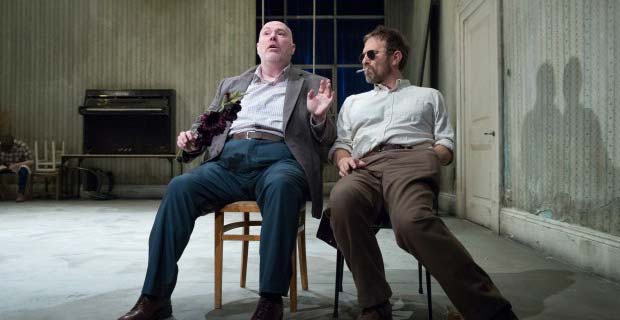 A Chekhov play which explores feelings of displacement, emptiness, identity and ultimately depression is not an easy sell, in world where Donald Trump is calling the shots in America, Brexit rows continue, and sex scandals continue to make the headlines, as we tut and then simply get on with our lives. With that menu, a Will Ferrell film might seem like the more obvious escape route!

But, Walter Meierjohann’s exquisite production is filled with moments to savour, and this is thanks in part to Andrew Upton who has adjusted and tweaked the original text respectfully, so that the sweeping beauty remains but the characters’ plights feel timeless.

This is a play about fear, as the characters glide and scurry across the stage, agitated about the new order. And this is where the play excels, as the UK is going through a massive phase of uncertainty. We may have Change.Org and twitter, but how much control or say do we really have? Sonya (the graceful and versatile Katie West) has made the ultimate sacrifice to manage the estate, with her Uncle. This means that her father can lead a charmed life, or can he? His arrival with his wife Yelena, uncovers many home truths which the family do not wish to confront. West giggles nervously, knowing that the way she is labelled “plain”, is what defines her.

This is a production that charms you, as each scene unfolds and the emotions unravel. Each performer is at the top of their game. Nick Holder conveys Vanya’s humour, desperation, imprisonment and sense of loss of hope superbly. You feel for him, when in another production he may appear self-indulgent. This is because he gets under beneath the skin of Vanya, and his inner turmoil becomes compelling.

He is matched by David Fleeshman (Vanya’s brother-in-law) who also conveys pain, but this time it’s physical. Hara Yannas as Yelena veers from feline, to “ferret” as Astrov (Jason Merrells) describes her, as she sets up a situation, whereby she gets him to confess to her how he feels, discarding and hurting another character, masking it as collateral damage.

Merrells is as superb, as I have seen him perform, as he clearly revels in the variety of emotions that Astrov goes through before we arrive at the poignant denouement. This is an expertly delivered turn, but every member of this talented cast deliver, and you really believe they are ‘family.’

Marc Tritschler’s music encapsulates all the themes of the play and provides a feeling wistfulness and hope, which we know is futile, but we still long for it, as much as the characters themselves.

Steffi Wurster’s set design is stunning, from the peeling, fading wallpaper, to the mismatched dinner tables, clumsily joined together. This is a play about fractures, cracks and lack of symmetry, and you see that on stage from the get go.

This is a truly stunning production, and I recommend it without reservation.

Uncle Vanya is at HOME until 25 November.