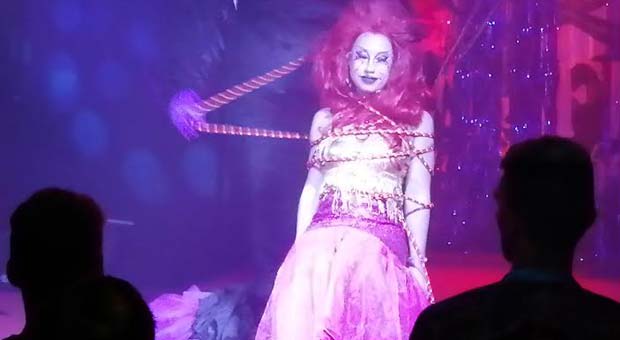 Twisted Disney: Once Upon a Scream, at Night and Day

Twisted Disney: Once Upon a Scream, at Night and Day in Manchester, certainly lives up to its title. If you still go to confession, this is not a show for you – unless you’re willing to do major penance. For everyone else it was a lot of fun. It started with a meet and greet session where it was difficult to see who was performing and who was there to observe. As would be expected in a fetish themed show, costumes were extreme and the makeup even more so.

This was a good evening, and by the interval we were hooked. The energy of the various performers, and their ability to do the splits and throw themselves about, more than made up for the occasional lapse in lip-synching. I doubt Uncle Walt was a fan of Bonnie Tyler, still less of The Pretty Reckless, but I Need A Hero, and Under The Water worked well. I wasn’t too taken with the dismembering of cuddly toys, but it was impossible not to laugh at Let’s Do It Like on the Discovery Channel.

There wasn’t a printed programme, or a handout, so it’s not possible to give named credits, but with characters like Ophelia von Sodomy, Scorpia, Rayna Destruction and Creeping Miasma you can imagine what sort of show this was. Things were held together by a shimmering Paul Aleksandr.

Sadly, it was a rather small audience who were privy to this single night event, but perhaps there will be another outing for this show in the future.