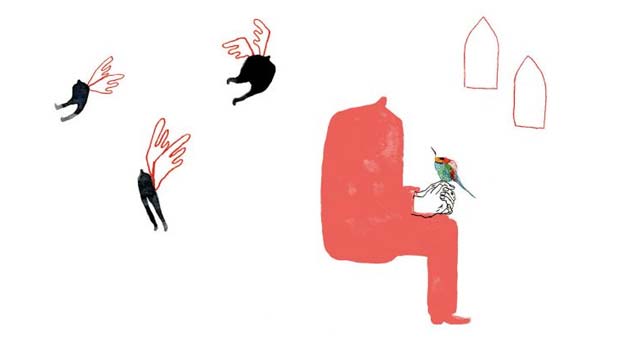 Tuesday, by Studio ORKA, which is being presented as a world premiere, is the life story of a foundling, who was given that name as that was the day on which his mother abandoned him. The setting for the performance, Saint Augustine’s, Pendlebury, is fitting, as he was abandoned in a church and thus here is where his life begins. And here it continues - as he never leaves it.

Several of the main characters have younger and older versions of themselves, but it’s only Tuesday who appears in both guises at the same time. The others start out as children but then their older counterparts take over, and age visibly as the timeline progresses. There is also a large chorus who provide a very effective vocal background.

We start with Tuesday as an old man partly as narrator and partly in character, where he’s preparing things for a funeral. The story unfolds as a series of episodes that shape Tuesday’s life. These start at the end of WW II and end almost in the present. At first these felt a bit disjointed but as the evening progressed a sort of rhythm established itself – and here the chorus worked very well.

It would be too much of a spoiler to detail the events in depth, but there are serious, lighter and hilarious moments, and at one stage things become almost riotously camp when the chorus performs La Macarena (and other numbers) with actions, and the moment where Hilda forgets her shawl turns into an Army of Lovers fest.

At the end we come full circle as the identity of the deceased is revealed, and Tuesday gains a bit of knowledge of his origins.

All performances are strong, but some special mentions are due. (Old) Tuesday (Titus de Voogdt) is rarely off stage, and both he and Nestor (Dominique van Maider) must be exhausted at the end. Hilda goes from widow to bride to widow again with panache, and (Old) René makes a convincing son who suffers at his father’s hands.