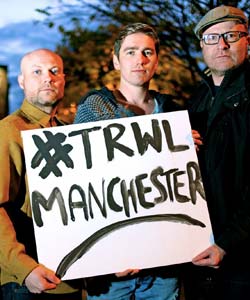 Following the massive success of the Same Sex Hand Holding initiative on Friday night,when hundreds of people turned out in the Gay Village to show solidarity with our LGBT friends in Russia and beyond,last night at the Contact Theatre saw the start of a fortnight of events as part of Queer Contact.
We were treated to 4 brand new plays written especially for #trwlmanchester,which all dealt with the current discrimnatory laws in Russia in very different ways.

Adam Zanes Hope Theatre Company Article 6.21, drew strong comparisons with our own Clause 28 issues and protests from the 80,s,with a fine troupe of young actors relaying qoutes from the famous of day and reminding us all just how emotive the whole matter was at the time.Verbatum interviews too with latter day Olympic Skater Blake Skjellerup and a young Russian who lives and work in the Uk,really gave us rare insight into what life is like to be LGBT in Russia in 2014,aswell as the importance of Pride Houses.

Champions by Rob Ward ,by contrast showed us the complex relationship between two young male boxers who under the guidance of their shared trainer try to develop a 'secret' love affair away from the prying eyes of the authorities.The constant battle between life in the ring and their stolen private time together is deftly handled by writer and by the talented trio who performed this story.

Don’t Tell The Kids by Chris Hoyle,shows us yet another aspect of the difficuties experienced by 3 young people who on the eve of the Sochi Games decide to go to a rave party together.Driven by the out Lesbian Stacey, who encourages her gay friend Callum to out himself to his 'special' pal Azeem who himself, is clearly struggling with his own sexuality against a backdrop of a Muslim family and homophobic friends,leads to an unhappy result.The play has tremendous wit and again is beautifully played by the 3 actors involved.

Then finally One Abstention by Stephen Hornby cleverly showed by the use of flashback, just how the attitudes that prevailed in earlier times,between the younger principle characters,who were both full of fun and hope for the future, become cruelly trampled on by a caustic mix of indemic political homophobia and sheer manipulation, which we witness being used to blackmail them in their latter day situation.
Some strong performances again leave us wondering just how this could still be happening in 2014, as our politicians seem to wear their sexuality almost as badges of honour..

The night ends with the reading of an email from the young gay Russian man, thanking them for their support and wishing everyone luck with the show, "from Russia with love". In conclusion, To Russia With Love was a thought-provoking and challenging event.
This fascinating collective was hugely entertaining and thought provoking throughout.The packed audience then all streamed out into the night,presumably to enjoy many of the basic freedoms that we all from time to time,take utterly for granted.

For details of other performances at Queer Contact..Please click here.