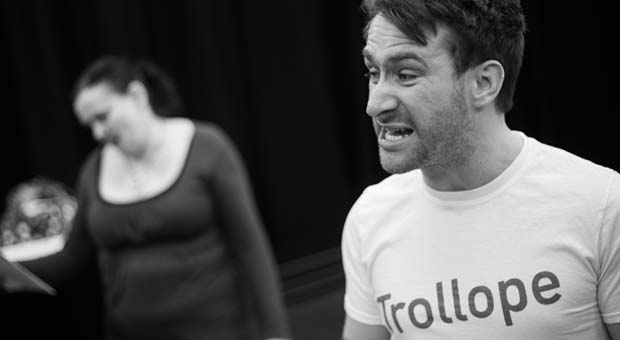 This is a charming bit of fluff, full of quirks and laughs.  The writer Ronnie Leeks has great style and intelligence in his writing, which bears comparison with Douglas Adams.  For example, the voiceover at the beginning announced amongst the mobile phone warning and such like "Anyone heavy petting in the audience will be watched closely"... One to look out for in future, with the same irreverent humour which only the English can do well, and so appeals to the theatre-going audience which filled the large auditorium at the Kings Arms to capacity on every night.

The three energetic actors play their roles magnificently, coping with the dialogue and changes of accent needed, so much so I could almost believe any fluffs were scripted. There were genuine surprises, which I won't spoil, and the actors clearly loved the roles they were playing. A glittering future in comedy clearly awaits them all, particularly Ali and Jennifer who took to all the changes of character extremely well. I particularly liked Casanova, with a perfect Italian accent, at least according to the English!

A further brief canter through history brought out an interestingly demure performance by Dorothy Wordsworth, and an insight into Adolf's relationship to Eva  previously unconsidered, amongst other things.

A one hour play without an interval, using a small number of props extremely well, and making a virtue of their lack of quality, like Les Dawson appraising the prizes on Blankety Blank. I would recommend catching this group at their next performance.

Will Haven for Canal St Online

More information about the show.