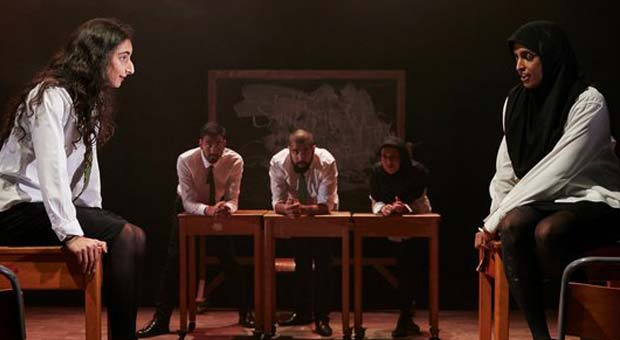 Trojan Horse, written by Helen Monks and Matt Woodhead, and presented by LUNG in association with Leeds Playhouse, is on for two nights at Oldham Coliseum. The 2014 events it covers can be found here: https://en.wikipedia.org/wiki/Trojan_Horse_scandal, and the play shows just how destructive baseless allegations and rumours can be when given credence. It’s effectively Arthur Miller’s Crucible (also a real-life event) brought into the present, and there are elements of Kafka’s Trial too. It’s a hard-hitting piece. The sparseness of the production forces the message across all the more, and at the end there are few winners, if any.

The cast of 5 all perform multiple roles (pupils, teachers, parents, inspectors, lawyers) and the switching between characters is well done. The acting is excellent, and everyone’s sheer frustration with the inquiries is palpable. Each scene is preceded by a projected backdrop and with audio clips from the politicians of the day, notably Michael Gove. It could be argued that taking short sound bites out of context is misleading, but not one of the politicians comes out well – although some have survived, whereas the teachers have not. Vindicating evidence that the prosecution had been sitting on was finally disclosed but this came too late.

We were told that the play is to be performed before Parliament. It will make for an interesting evening.

Trojan Horse won the Amnesty International Freedom of Expression Award in 2018 at the Edinburgh Fringe Festival, and deservedly so. Whilst the main theme of the play is Islamisation, LGBT issues are also touched on. Right now, also in Birmingham, there is another storm over LGBT inclusivity teaching, with protests by predominantly Muslim parents arguing against it. There is a further play waiting to be written here and these are the people to write it.