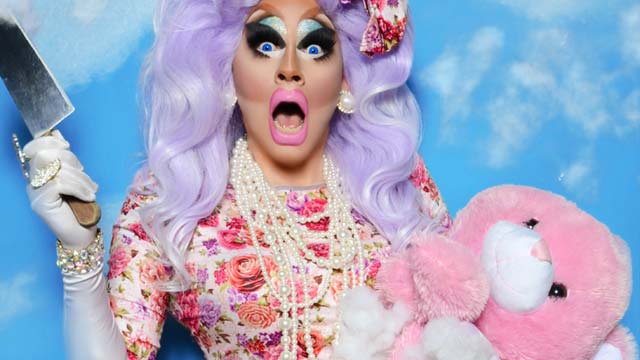 The Frog and Bucket in the Northern Quarter is famous for launching the careers of famous comedians such as Jason Manford, Peter Kay and Johnny Vegas to name but a few.

On Sunday 07/05/2017 it was the turn of Trixie Mattel, the sweetheart of Ru Paul’s Drag Race Season 7. Her one-woman comedy show was superbly supported by Anna Phylactic, Ruth Cockburn and Max, also from season 7 of Drag Race.

If you’ve never heard of Trixie Mattel before, I’d describe her as half Barbie doll, half Joan Rivers.

The show (titled AGES 3 and UP) is all Trixie’s creation - she wrote it and you can tell. It’s packed with plastic and heart! She dances, sings, plays the guitar and so much more...We certainly laughed and then some!

Trixie Mattel slayed the packed venue with brimming energy and a varied performance. Her style was very much anecdotal; she told the story of her journey from Theatre show wannabe to drag superstar. She jokingly (and explicitly) shared her views on sex, drugs and drag - even taking the time to poke fun at some of her RuPaul Sisters (Phi Phi O’Hara look away now).

Apart from being outrageously funny, Trixie surprisingly has a gorgeous, velvety voice. She performed a guitar ballad from her new album Two Birds. Her musical style being Folk with a dashing of Country and Western.

Here’s hoping you break into the Billboard charts Trixie!

Trixie’s point of view breaks the mold and stops production altogether. Her interaction with the audience was lovely to see as she masterfully but never offensively, poked fun at the engaged crowd. I got the sense that she was never performing at you but rather conversing with you.

Klub Kids next shows include Alyssa Edwards and Queens Of Comedy at 02 Apollo on September 2nd. If Trixie Mattel is anything to go by then these are going to be simply unmissable!!

See the world through her iconic, doll-like eyes in TRIXIE MATTEL: AGES 3 AND UP​. Accessories sold separately, batteries not included.