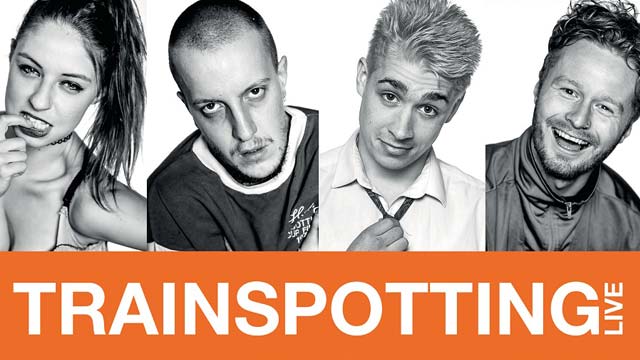 Trainspotting at The Lowry

With the well-received sequel T2, currently out on DVD and on demand, there is renewed interest in Irvine Welsh’s original novel, and the first Danny Boyle film. So, there is no better time to catch Trainspotting live on stage.

But, regulars to the Lowry, be prepared! From the minute, you enter the Quays theatre, you will notice some major changes. You are handed ear plugs and a wrist band on arrival, and you are led by some jubilant clubbers into the venue, which resembles a bed sit meets a drug fuelled night club. Livin Joy’s exuberant track “Dreamer” blares out of the speakers, and you are taken back to a time when the drugs worked for many.

It’s apt that the company are called In Your Face Theatre, as there is not much let up for the actors, who work like dogs throughout. But, the effect of the immersive nature of this production is mixed. During some scenes, such as the infamous toilet scene, this totally works, as you get to experience the degradation, as well as see it. And humour is used to good effect throughout.

The audience do get used to the constant references to them, as if they are characters, and it gives the illusion that the cast is far bigger than it is. But when Begbie (the brilliant Chris Dennis) struts across the intimate space and shakes his drink at the audience, you do not gain anything narratively speaking and it feels like an effect – which exists purely because it can.

In terms of performances, there is no weak link whatsoever. But for me, Greg Esplin’s Tommy is so likeable, his pre- destined demise is

heartbreakingly real, as this actor captures his despair perfectly.

Gavin Ross plays Renton as a hybrid between the skinny jeans wearing skinhead and his (movie) pal, Spud. And he does so admirably. And, hats off to Erin Marshall, who portrays grief with every inch of her body and you feel her pain.

The play moves at light speed, so unlike the film – you never engage with the characters as much as you would like. But, comparisons with the movie aside, this is theatre which crosses boundaries, a play to be experienced, and it offers you a unique, thought provoking and entertaining night out.

And the cast sure have a lust for life.

Catch it on tour: