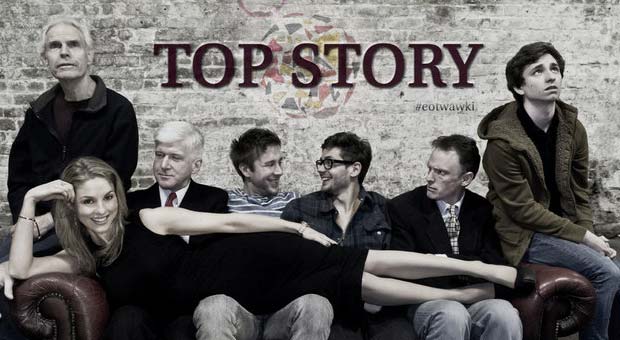 Top Story is, well, an apocalyptic comedy, written by Sebastian Michael. An Optimist Creations and Cherry Picked Pictures co-production, it was performed at the now defunct Old Vic Tunnels in 2013 and is currently available to watch online for free.

In this Beckettian play, a meteor the size of LA is going to hit (ironically) LA. The majority of the narrative centres on friends Gus and Talfryn as they await the end of the world in a London flat. They stock up on ale and spend their last seven days in isolation, watching the news (where numerous men humorously if somewhat repetitively profess their feelings for anchor Chrissie Craven) and trying to create a legacy to outlast them, either by reinventing the rules of chess or by saving the world - they have a few days to decide which.

The lengthy scenes of dialogue between Gus and Talfryn are intercut with the various news reports, which are much lighter and snappier, as well as the occasional scene with two soul-searching angels who reside in a dimension incomprehensible to us and spend their time having extremely deep and interesting discussions about life, the universe, and everything. These more philosophical scenes were my personal favourite.

Though the premise of the world’s end has huge implications, and is often represented on a worldwide scale, here it is explored on a more personal level, giving a global crisis a strangely intimate feeling. And when I say ‘strangely intimate’, this is accurate on multiple levels, as Gus and Talfryn share an unusual dynamic that has sexual undertones, yet is never explained, explored or resolved. This makes their relationship strained at times, and not always easy to watch; but such issues are short-lived, and their conversations become more exciting and poignant as the end edges closer.

The current world crisis makes this piece even more relatable than ever - their forced isolation, the fact that everyone's first instinct is to stockpile, and a certain conversation about key workers, had me rubbing my eyes and checking what year this was written. The underlying message is something we have all probably realised ourselves over the past few weeks - in stressful times what we really need are human connections and a positive attitude.

Despite being disjointed, and maybe not the most exciting apocalypse ever depicted, Top Story is funny and engaging with a surprisingly powerful climax that involves the joy of dance and the power of hope and solidarity.