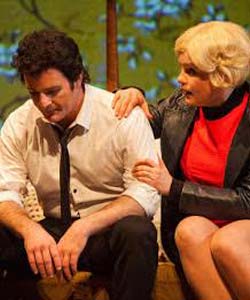 A story of Tom Jones

Tom – A Story of Tom Jones – The Musical

I first saw reviewed Tom Jones live about 10 years ago, and had low expectations. But, he completely blew me away. There is not a genre of music this man cannot sing, and he is one helluva entertainer, so I was looking forward to seeing this new show, all about Tom.

Kit Orton plays the great man, and the piece follows his slow rise to fame from 1955 to 1965. You get to see how, he battles to convince record company executives that he knows a hit record, when he hears one. The show also explores his wife’s well-founded fears about his wayward ways with fans.

This is all interesting up to a point and it is interspersed with performances, which really get the audience going, as that’s why you come and see a show like this one. Unlike shows such as, Jersey Boys, Million Dollar Quartet and Beautiful – there is so little live stuff,  in the first act - that you are dying to hear some more by the time act two begins.

But Mike James book focuses on the drama and some awkward comedic moments, whereby we seem to be laughing at a bunch of stereotypes. From prostitutes, gay men and mental health – these are all used for comedy ‘comedy’ purposes. As much as this reflects the time the piece is set, should we be really be asked to laugh today?

Orton is a great frontman and he has many of Tom’s mannerisms and he can sing. But in terms of the Jones’ famous Yeaaahhs and his swagger, he conveys some of this but he is limited in his scope, because the piece only covers his rise and struggles.

Sean Crowley’s set design is quite sparse, as a video screen covers most of the set changes, and on such a big stage – this feels like cheating. A real set would invite the audience these homes, but as it is, every backdrop is projected.

The live sections are great and capture the frustration Tom must have felt, every time he heard a ‘No’, and remind you of his time on The Voice, and the fact that he made a great coach, as he has been through the mill, himself.

Elin Phillips plays Tom’s wife – Linda and brings far more than is on the page, but she is reduced to a ‘wife’ who wants Tom home, yet wants him to do well. It is a thankless role, but the actress does great things with it, conveying genuine emotion throughout.

At times, this show is funny and sharp – “You don’t wanna be doing this until you are sixty,” says Linda. And at others, it meanders. More live tracks and a concert section lasting 25 minutes would breathe more life into the piece and add some pace.

Tom is a very respectful and polite show and will offer fans a chance to see the Welsh warbler, before he turned into a sex bomb.

Tom is at the Lowry until 28 May.Book here.