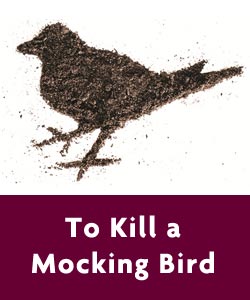 To Kill a Mocking Bird

Harper Lee's timeless classic comes to the inimitable Royal Exchange Theatre for six weeks and what a treat it is: as crude as it might be to laud and gush over a performance in the first sentence.

The venue is sold out, as apparently it is already for the duration and we are all more or less gripped from the offset. The casting is near perfect. Particular mention must go to the wonderful Shannon Tarbet as Scout who carries the story, obviously, and is a true joy to watch.

She is near perfect in her accent and delivery after a tiny, initial blip, which is more than forgiven. She is the star of the show, though not to deflect from the rest of the cast, especially Rupert Simonian as her brother Jem and Nigel Cooke as Atticus, who really comes alive in the second half, especially in the court scenes. The court room drama itself, though literally adjourned for the interval, never loses momentum and is gripping. In parts, the extreme silence in the theatre really adds to the intensity of the case.

The set is perfectly constructed and orchestrated throughout and the addition of  music, notably Bluegrass, during set pieces  adds to the 'reality' of the represented Southern town of Maycomb, based on Lee's hometown of Monroeville, Alabama.

Though the content unfortunately still has some context today, (no pun intended in "timeless" above), 'To Kill A Mockingbird' will continue to be performed for a long time ahead, whether it is as a metaphor or if it is to show that characters like Atticus Finch are both revolutionary in their thinking  and a little naive in their expectations of contemporary society. As it is, we know that this play is not based solely on a novel about racism and narrow-mindedness, but also about the 'coming of age' and 'loss of innocence' of children and on all these levels combined, it is a must see.