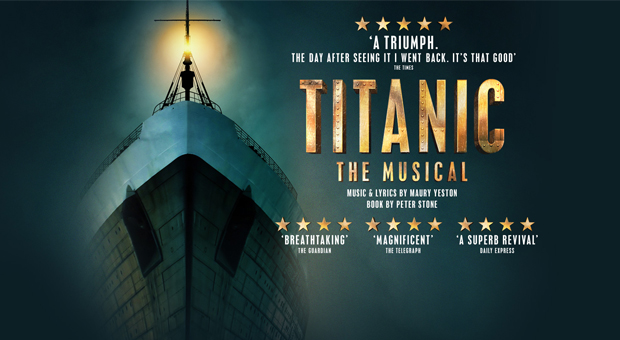 Based on real people aboard the most legendary ship in the world, Maury Yeston and Peter Stone's five-time Tony award-winning musical, Titanic, is currently running at The Lowry. In the final hour of 14th April 1912, the RMS Titanic, on her maiden voyage from Southampton to New York, collided with an iceberg and 'the unsinkable ship' slowly sank. It was one of the most tragic and infamous disasters of the 20th Century. 1517 men, women and children lost their lives.

Peter Stone’s book focusses on the crew and people from Third, Second and First Class passenger lists – their hopes, dreams and prestige of being on this inaugural voyage; the unmarried mother-to-be; the illicit couple; the millionaire elite. However, the book is long and deals with too many characters in too little depth. Maury Yeston’s music is pleasant but repetitive. I enjoyed In America, however the rest of the songs sounded too similar and merged into one. Greg Castiglioni (Thomas Andrews) impressed vocally and the choral numbers worked well, filling the theatre, but otherwise the cast sounded challenged by the range of the score.

Perhaps the heat of the Bank Holiday weekend had an impact on this rather flat opening night. A predominantly bland, static set, whilst atmospherically lit, did not help the momentum of the evening and this production lacks the wow factor that RMS Titanic undoubtedly offered at its launch. This highly anticipated production unfortunately misses the emotional heights that it should offer.