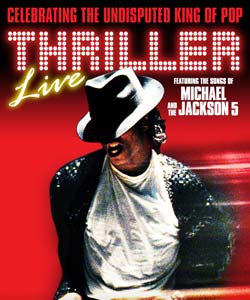 Direct from London’s West End, Thriller Live is a spectacular concert created to celebrate the career of the world’s greatest entertainer. Join us on a visual, audio and electrifying journey through the magic of Michael’s 45 year musical history.

Opened this week for a short Manchester run and we were there..

Thriller Live rolled into Manchester once again and Michael Jackson fans of all ages were in full force. The show is a greatest hits concert with no less than 34 of the music legends iconic songs with tributes to his historic themes, dance routines and costumes.  It is a wonderful look back at Jackson’s back catalogue which is a huge hit with the fans and it’s a great way of introducing the next generation to the icons music as the show is a genuine representation of the artist’s style, energy and quality of his worldwide hits

The set is simple but effective making great use of video screens and lighting which changes to suit the mood and the time period of the songs that are being performed. Having seen the show in the West End the touring show closely meets the London spectacular. As well as a highly visual set the show also has group of skilled performers who execute the iconic dance routines seamlessly with standout performances from Peter Cleverly and Gianni Arancio. . The six piece band perform the music legends tracks fantastically and the audience appreciate hearing the tracks performed so well especially the guitar solos in the rock numbers such as Beat It.

The show starts as expected as the start of the Jackson’s career back in Motown with the hits that made the family band a worldwide success. From those early days the audience is taken on a journey through the decades as the show visits the icons biggest songs.

The cast includes Shaquille Maerice Hemmans and Michael Karuma who do an exceptional job and getting the audience in the party mood with a real Jackson sounds. Rory Taylor (finalist in ITVs Superstar) and Cleopatra Higgins (Lead vocalist from the 90s pop group Cleopatra) give the show texture with their impressive contributions. Sean Christopher not only looks and sounds incredibly like Michael Jackson but he executes the legends move with flawless effort.

The show is a must see for fans of Michael Jackson and it’s a great way to take a trip down memory lane.