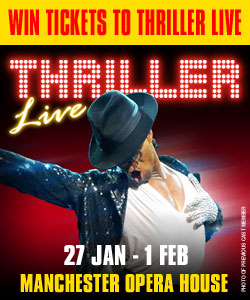 Thriller
@ The Opera House 27th Jan 2014
The music of Michael Jackson and the Jackson 5 has been the soundtrack to my life for as long as I can remember. Many of the amazing hits are instant reminders of times in my life and it was clear last night that this was the case for a whole audience of Jackson fans who turned out for the opening night of Thriller at the Opera House. The show celebrates the musical legacy of Michael and his brothers in a show that delivers the feel good factor.

From the moment the lights dimmed for the opening video sequence the audience were hooked and with every song the atmoshphere became more and more electric until the whole of the Opera House were on their feet for the finale. Many of Michael’s landmark videos were recreated for the show and each one had the crowd cheering with delight. The whole cast were outstanding, withtightly choreographed dance routines and fabulous vocals from the lead male stars Sean Christopher, Tyrone Lee and the wonderful Jesse Smith.

For me the night belonged to local talent Cleopatra Higgins who stole the show with not only an amazing soulful voice and stunning wardrobe but with a Janet Jackson like stage presence that fitted so well into the concept of the show. The whole production takes you through Michael Jackson’s career from the early days through to 'HIStory' in a dazzling way, focusing on the many massive global hits, which continue to pay homage to the late star.

I particularly loved that the music was provided by a band and not a backing track, giving the show a real concert feel.

Thriller is great family fun, fantastic music and electrifying dance routines, a trip down memory lane and a must for all Jackson fans.

Details of the show are found here and some tickets are still available.