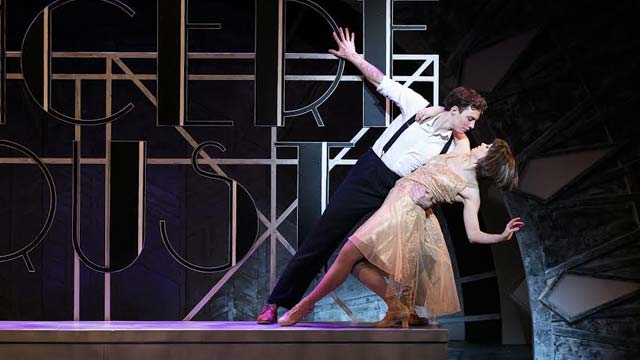 Following Monday night’s devastating terror attack in Manchester, many gigs and shows went ahead. It is a difficult call to make, but at a sad time such as this, people need a lift and Thoroughly Modern Millie, will give you the laughter that you need right now.

Strictly Come Dancing’s Joanne Clifton plays the title character, and she attacks the role with plenty of pizzazz and panache. As expected, she is a better dancer, than a singer but vocally she hits the heights required for this role, as there is nothing to demanding in the Miss Saigon or Les Mis calibre, so she acquits herself very well and her comic timing is excellent.

Likewise, Lucas Rush as Mrs Meers (better played by a man, as less offensive, than I seen previously) is  a joy to watch. Panto villain, for sure, but the actor knows how to play the audience to perfection. Sam Barrett is dashing as the male lead, Jimmy Smith. Graham MacDuff's physical comedy is amazing to watch, and he milks of all it’s worth.

With a small ensemble and a highly adaptable set design, the roaring twenties are bought to life, and the songs are sweet, if not always as memorable as you would like them to be. The show itself, is very light and airy, and a tad too long, if I am honest.

But, this excellent cast, including the beautifully pitched Jenny Fitzpatrick as Muzzy Van Hossmere give it their all. And even though the show itself feels too insubstantial to support the running time, there are enough entertaining moments, to carry an audience through to the funny conclusion.

The night I attended, many audience members were up on their feet. And you can see why, the mood in Manchester was sombre, and this cast, came and brightened their spirits with this witty revival. And you cannot ask more of them than that.

Thoroughly Modern Millie at The Palace Theatre, Manchester until 27 May.