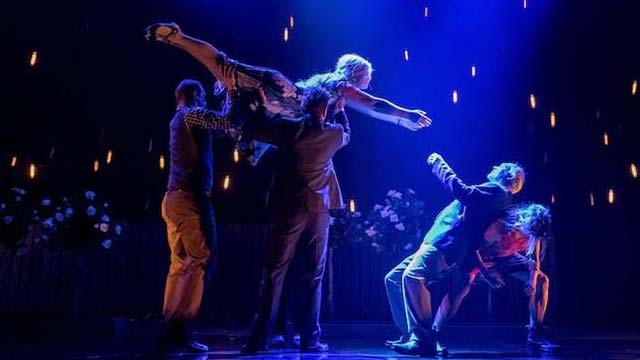 Things I Know To Be True at The Lowry

The Price family seem close knit on the surface. But look beneath the smiles and platitudes, and you find skeletons on the closet and plenty of secrets and lies.

Matriarch Fran, played by Cate Hamer is brilliantly drawn. She is feisty and strong, but also stubborn and if one of her adult children accepts a favour, they feel forced to take her advice, too. Her husband Bob, is played beautifully by John McArdle, and his fear of old age is really poignant.

Their chiildren present their parents with many problems and in some cases, they want solutions. The drama feels real for most of act one, as the relationships are so well drawn, it feels like a good documentary. As the narrative gathers pace, there are so many issues given to the audience, that it starts to resemble a soap.

Even so, there is still much to recommend. The performances for one, each cast member rises to the challenge of Frantic Assembly's marvelous movement, and convey every emotion from frustration, pride and regret with real ease.

Kirsty Oswald is excellent as the baby of the family, particularly when delivering a monologue. Seline Hizli's Pip is so well played, you feel as if you have met her. A career orientated woman, who realises you cannot have it all is judged by the one person she needs the most, her mother.

Many schools were in attendance on the night I attended and they were spellbound by this familiar family drama. And rightly so, as the actors give it their all, and the drama although over done, packs a mighty punch.