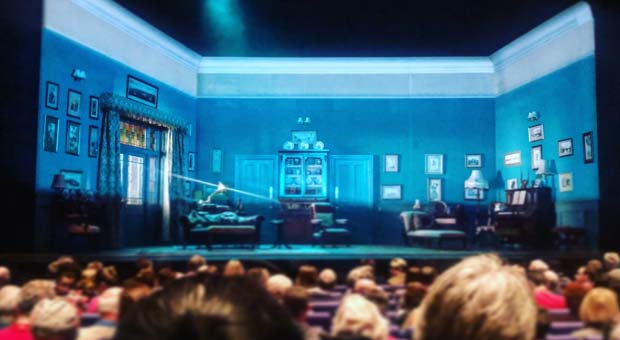 The Winslow Boy at The Lowry

The Winslow Boy takes us back to a period of gentility that’s hard, if not impossible, to imagine now. Houses had live in servants, trunk phone calls had to be booked, women didn’t have the vote, and social standing was of huge importance – whatever the cost. It was also possible to live on £840 per annum with a large house in London and support two children through college.

Ronnie, the youngest son of the Winslow family and a cadet at Osborne College, is accused of the theft of a five shilling postal order, and the play is about the struggle to clear the boy’s name, and the financial and emotional toll this takes on the family and others. The events follow those of a real court case.

Misha Butler, who makes his professional stage debut in this production, makes a convincing Ronnie. His father, Arthur – an autocratic and sometimes bombastic patriarch played by Aden Gillet – drives the play forward, but the star of the show is Sir Robert Morton, the defending barrister, played by Timothy Watson. His initial cross examination of the boy convinces him of his innocence, even though others have doubts, and this secures a constitutional debate in the House of Commons. The ramifications of bringing the case lead to Catherine, Ronnie’s suffragette sister, being jilted by her fiancé, penury for the family as the costs of the case mount, and fast failing health for Arthur.

In the real case the family eventually received a sizeable sum by way of costs and compensation. In the play, where the principle of “Let Right be Done” matters more to Arthur than mere finance, he declines to take things further, and in the closing scene we learn that even Sir Robert has been materially and emotionally affected by the long and drawn out proceedings.

It’s not all doom though: Ronnie’s brother Rickie, having been forced to leave Oxford after his second year because of the pressing financial constraints, has found gainful employment after abandoning his former wastrel lifestyle, and Catherine and Sir Robert acknowledge their differences having found a new semi-respect for each other across the wide gap of their political divide. At the very end, Catherine is left hoping for a brighter future for women – even though she herself has been scorned.

The Lyric theatre was not at its fullest, which is a pity as the play is very well worth seeing. It’s on until the 14th.

For more information and to book tix click here now.