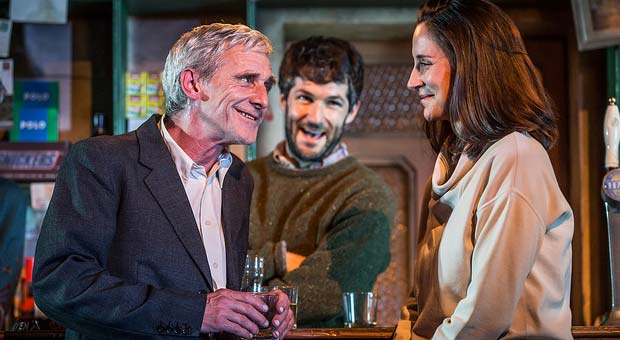 The Weir at The Lowry

With The Woman in Black still scaring audiences in the West End, and with Helen Mirren set to do the same in the film, Winchester – ghost stories remain big business.

Connor McPherson’s The Weir looks like a traditional play about ghosts on the surface. And it’s true that he characters gather in a quaint Irish pub, to tell their scary stories. But, the powerful thing about this brilliant play, is that their own lives are far more poignant and haunting than the folklore that they repeat, to entertain.

The Weir is over 20 years old, and I came late to the party, finally getting to see it as part of a revival in the West End, in 2014. And this gripping production from English Touring Theatre and Mercury Theatre Colchester, is just as good.

This is a play which seems as if does a great deal, with not very much. As essentially, it is a series of static conversations over one evening. But, it is the quality of McPherson’s poetic dialogue, the richness of Madeline Girling’s stunning set design, and five multi-layered turns which resonate, long after the curtain has gone down.

The naturalistic performances draw you into the narrative, and it has the effect of dropping into your local with friends. You feel as if you know these barflies, yet the surprising twists and turns mean that nothing is quite what it seems.

Sean Murray is fantastic as Jack, as he has the bravado and presence of a man who belongs in this pub, but each swig of his drink of choice, means that layers are peeled away, and the effect is heart-breaking. Hearing him talk about the simple act of a stranger preparing him a free sandwich, and his emotive reaction, is beautifully done.

Natalie Radmall-Quirke is also excellent, as Valerie, a newcomer with a few secrets of her own. Her character is judged by the others, until she reveals why she is in town. The way they respond, again is incredibly poignant.

Adele Thomas directs this play with respect and ease, the pace may not suit every audience member. But if you are patient, you are rewarded, as each line of dialogue is not wasted, and there is more going on here, than you realise. As you leave the theatre, you are reminded of the power of well written plays, and this one stays with you. As it has more thrills than any number of horror films, which aim to make you feel something, whereas The Weir mesmerises in a much more natural way.

The Weir is at The Lowry until 27 January. Click to book.