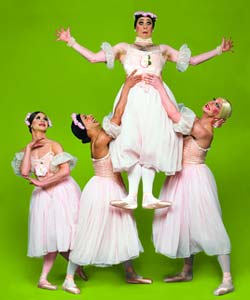 The Trocs at Lowry

As my companion, internationally acclaimed Choreographer, David Needham said (and he should know) "it’s great to see the technical quality of the dance and not just the humour." Someone else remarked "it’s a bit like watching Les Dawson play the piano, badly: you have to be really good to start with, to be that flawed.”

Last night we were treated to 4 excerpts .The first Les Sylphides was superbly performed and included good use of Corps De Ballet. Gags, combined with some of the original Fokine choreography. Technically, very strong and coupled with some great touches of show stopping humour, this first section set the tone of our evening ahead. Notable, were the performances of both Paolo Cervellera and Robert Carter who performed the parts of Viachesslav and Olga.

Highlight of the night for me was to follow. The famous Black Swan Pas De Deux., which, again is technically extremely difficult by anyone's standard. The quartet were superb, with Chase Johnsey as Odile and Carlos Hopuy as The Prince particularly outstanding. We counted 42 spins in total.

The charming La Vivandiere Pas De Six then followed. This performance extracted much of the camp humour to be found in the number. The artistry of Dying Swan Paul Ghislen, surely the long-time master of this solo, sent us off to the bar with broad smiles and giggles.

Our final segment, included Walpurghis Night with its dramatic score and potential for laughs. Yet again the tremendous Pressage Ariel lifts showed strength and technical expertise from the principles, whilst some lovely contemporary touches from the cheeky Fauns, received roars of approval from a packed and it would appear, knowledgeable audience. As for the finale; only a very camp and funny Clog dance could possible finish off the repertoire. Hilarious.  So, there you have it; The Trocs are back on top form.

Only tonight’s performance at The Lowry is left, before they embark on the rest of their tour. Some availability still remains. Go on, treat yourself.