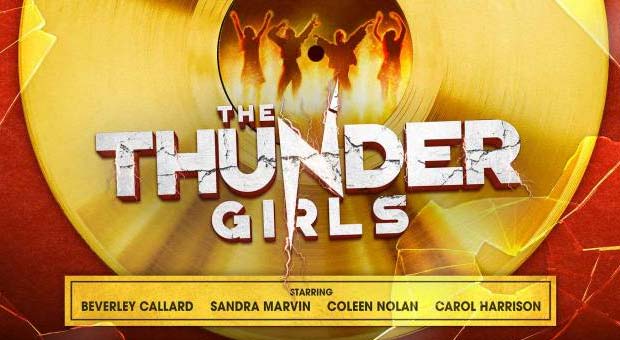 The Thunder Girls at The Lowry

It’s the 1980s. Anita, Carly, Chrissie and Roxanne are enjoying fame as legendary band The Thunder Girls. Then the inevitable happens – the split…as Chrissie quits to start a solo career, taking manager Rick (Roxanne’s boyfriend) with her. 30 years later the former girls of pop are reunited by their record label to discuss a potential big-ticket gig.

Based on Melanie Blake’s book of the same title, The Thunder Girls takes to the Lowry Quays’ Theatre stage to bring to life the journey the individuals have taken over the decades – continued fame, cosmetic enhancement, poverty, heartbreak and foreign love.

With a stellar cast of TV fame, Beverley Callard (Roxanne), Coleen Nolan (Anita), Sandra Marvin (Carly) and Carol Harrison (Chrissie), delight the audience with their bumpy road to reunion. Marvin impresses with her opening song; Callard is the queen of acerbic wit; Harrison waves her arms a lot; and Nolan impresses with a relaxedly natural, and comedically perfect, performance that outshines her co-stars. Such a shame we do not get to see more of her in Act One.

Award for the briefest stage performance must go to Gary Webster (Rick) for his 5 second appearance in the final moments, after spending the evening as the voice at the end of a speaker phone. The cast clearly enjoy themselves, responding well to audience reactions, and ad-libbing accordingly (with a shout out to Claire Richards in the stalls when comparing The Thunder Girls to Steps).

There were a few technical issues (mis-timed lighting, over-mic’d voices), questionable lip-synching and nervous performances, but the predominantly female audience lapped up the tales of woe and joy, the catty jibes and the largess of middle age. The Thunder Girls have matured into the Loose Women of today. For lovers of daytime TV this will satisfy your inner bitch.