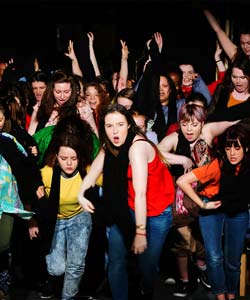 One of the world’s oldest plays, Aeschylus’s The Suppliant Women has been reimagined for the Royal Exchange in a new version written by David Greig and directed by Ramin Gray (Artistic Director of the Actors Touring Company). Exploring issues of migration and democracy, gender politics and political power, this 2500 year old play reflects some of the major issues of contemporary society.

As per Greek tradition the production begins with a local dignitary (for us, business leader John Caudwell) providing a speech of thanks to those involved, followed by the libation – the pouring of a bottle of wine around the circumference of the breezeblock stage. Let the performance commence!

Mimicking the ocean’s current, a 40-strong group of women ebb and flow onto the stage. Carrying suppliant branches entwined with marine detritus, this powerful entrance was reminiscent of last year’s shocking scenes of escaping migrants. The women arrive arguing for their lives, escaping forced marriage in their homeland, hoping for protection and assistance through asylum in Greece.

Performing alongside Oscar Batterham (The King), Omar Ebrahim (Danaus/Herald), and Gemma May (Chorus Leader) are the Chorus of non-professionals recruited from Greater Manchester residents. They take to their role with enthusiasm and determination, filling the intimate stage with colour and sound, but need to work even closer together to ensure crispness of movement and harmony.

The single act production is performed in rhythmic dialogue, sound and song, with new music by composer John Browne. The live musical accompaniment, including the ancient Greek twin-pipe aulos, created a haunting and beautiful backdrop to the on stage movement.

This epic feminist protest is a powerful piece of ancient theatre, resonating with today’s political headlines, and eliciting resounding affirmation from the Tuesday night audience.