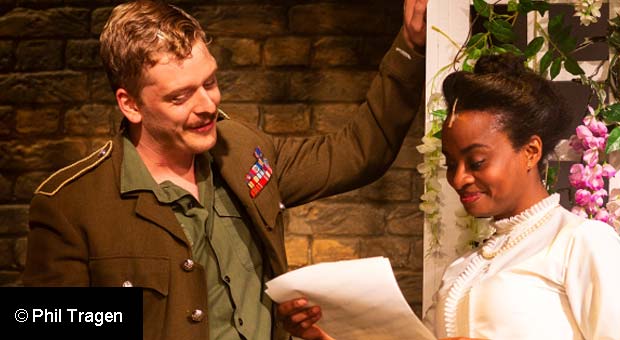 The return of the Soldier

Mrs Grey receives a personal letter from Chris and a telegram from the army as his next of kin. He has been injured on the front line during WW1. A classic love story of a veteran homecoming... or maybe not. Chris (or Christopher to his family) is Mr Baldry; his wife is Kitty; she does not receive a telegram. Add in a love-struck cousin (Jenny) and a loving husband (William Grey) and what unfolds is a labyrinth of love. Based on Rebecca West’s 1918 novel, The Return of the Soldier takes a while to work out.

The show opens with composer Charles Miller’s beautiful title song, a refrain which intersperses moments throughout the evening. Indeed there are rather a lot of ballad-like numbers, that by the interval they begin to merge into one. Thankfully Act Two moves up a mark and offers more variance in musical style.

Director Charlotte Westenra makes the most of the intimate Hope Mill space expertly intertwining the cast as they move from one scene to the next - the water basin/row boat moment was a clever touch. The strong cast work well together, with Marc Pickering particularly impressive in both his roles. His plain and homely Mr Grey is the polar opposite of the cocksure, hilarious Dr Anderson. Two excellent performances that bring the stage alive.

The story is unexpected and keeps you wondering where it will go. The introduction of Dr Anderson is almost Christie-esque as he helps to unravel the confusion. Once the cast settle into the run, and front of house ensure a prompt start and tightened interval, The Return of the Soldier will develop into the success it deserves to be.