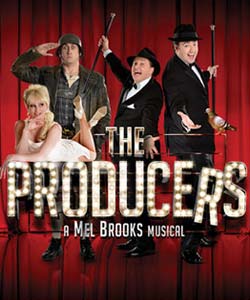 Here's what we thought..

'The Producers, a smash hit Broadway musical comedy starring Jason Manford as Leo Bloom, Phill Jupitus as Franz Liebkind and Louie Spence as Carmen Ghia, has arrived at the Manchester Palace Theatre and is showing until Saturday 21st March 2015.

Based on Mel Brooks' much loved Academy Award winning movie, The Producers is a hilarious musical comedy that has taken Broadway and the West End by storm, winning a record-breaking 12 Tony Awards and 3 Olivier Awards.

Impoverished by a string of flops, New York producer Max Bialystock recruits timid accountant Leo Bloom to help him pull off Broadway's greatest scam. Together they aim to produce the worst show ever and run away to Rio with millions, but they soon learn that showbusiness can always find a way to kick you in the teeth.

This show will have you laughing from start to finish, it is a true comedy masterpiece.  The stage is full of glitter and larger than life characters. There is plenty of cheeky gags and knowing winks.

Jason Manford should not be underestimated. He has truly shown that he is more than a comedian and is a very talented actor.  You simply forget that it is Jason and truly believe what he is portraying, from his american accent to his amazing singing voice.  It was as if the role of Leo Bloom was made for him.

Then there is Louie Spence, well what can you say about Louie?  Camp, camp, camp and plenty of high kicks! Louie received some of the loudest laughs and biggest cheers of the night.  He truly acted up the character of Carmen Ghia, making it with his own unique dance style. Louie certainly played to the audience and practically stole the show.

Not forgetting a brilliant performance by Phill Jupitus as Franz Liebkind. Another brilliant comedic actor that pulls off this maniac of a character superbly.

Complementing the three big stars was Cory English as Max Bialystock and Tiffany Graves as Ulla.  More fine talent with brilliant voices - both spoken and sung. They truly make this production a must see and it is now wonder it has won so many awards.

The Producers is sure to be a sell out and is definitely one production this year that is worthwhile going to see.  You’ll soon realise not to take life so seriously, to have some fun and be made to laugh over and over again.  The chosen cast are the perfect choice and will make this a sure fire hit for audiences all over'.

The Producers is on at the Manchester Palace Theatre until Saturday 21st March 2015.