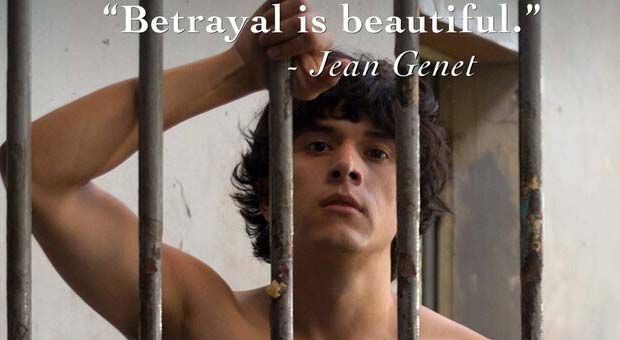 El Principe (The Prince), which won the prestigious Queer Lion Prize at the 2019 Venice International Film Festival, is the directorial debut by Sebastián Muñoz, a seasoned art director who has worked on more than ten Chilean films. Co-written by Muñoz and Luis Barrales, El Principe is based on an obscure novel of the same name by Mario Cruz that was published in the early seventies.

The action takes place in San Bernardo, Chile circa 1970, in the months leading up to the election of socialist Salvador Allende as Chilean President. The opening shot is an extreme close-up of the slit throat of a young man as his blood pools on the floor. We then see the protagonist, Jaime (Juan Carlos Maldonado), as his crime - the public murder of his best friend - sinks in.

From the next scene onwards, the majority of the somewhat meandering narrative takes place in a volatile men's prison, where sex and violence are everyday occurances - and are presented here with an unflinching realism. Jaime is shown to his cell, where there are already four men sharing one bunk bed; and owing to his youth and good looks, he is immediately taken under the wing of the cell’s alpha male, an older man with an explosive temper and a subtle sensitivity nicknamed ‘The Stud’ (Alfredo Castro, who provides the film’s standout performance).

Jaime, who is soon given the moniker of ‘The Prince’, is pressured into sleeping in The Stud’s bunk, and is sexually assaulted by The Stud in the night. Although this first sexual act is not consensual, and may therefore make some viewers uncomfortable, the relationship between The Prince and The Stud eventually becomes codependent, with moments of vulnerability and tenderness that go some way to offset the brutality and insensitivity of the rest of the film. The theme of the story, then, seems to state that love and respect can be found in the most unexpected of places.

The prison scenes are occasionally interspersed with flashbacks centred around Jaime’s blossoming homosexuality, particularly in regards to his relationship with the friend and object of his (hesitant) obsession that he later murders - known only as ‘The Gypsy’ (Cesare Serra). These flashbacks unfortunately provide very little to the plot or to Jaime’s character, and are more often than not an unwelcome diversion from the main narrative.

Jaime has an overwhelming apprehension in the early scenes that, although understandable given the situation, causes him to be completely passive and rather devoid of personality. Even when he comes across as more confident later on, as well as in the flashbacks, we aren’t given a true sense of his feelings or opinions; he seems to be a character floating through a narrative rather than actively taking part in it like a great protagonist should. In many ways Jaime resembles the protagonist of Albert Camus’ absurdist novel, The Stranger, who is portrayed as emotionally and morally indifferent in this chaotic and irrational world and therefore detached from other people as well as his own actions. In fact, there are a number of parallels between The Prince and The Stranger, including a seemingly senseless murder and a thin plot that focuses on depicting what happens without commenting much on why it happens or even how it makes the protagonist feel.

El Principe is essentially a rite of passage story. Jaime’s new environment transforms him from a timid boy who is confused about his sexuality into a confident inmate with a greater understanding, not just of how to survive, but of how to thrive in prison - more so than he was ever able to before his incarceration. However, even at its most difficult to watch, everything seems a little too easy. The change in Jaime and his relationship with The Stud happens very suddenly; and even less believable is how little opposition there is to homosexuality, both in and out of prison - don’t forget this is 1970s Chile we’re talking about. It doesn’t seem like there are any heterosexual inmates at all, so audience members will have to suspend their disbelief in order to fully appreciate the story.

The film’s strengths are undoubtedly in the performances and the production design, the latter of which has a gritty yet glamorous feel that perfectly encompasses the tone of the film - as being locked up ironically leads Jaime to discover a sense of sexual freedom.

The award-winning El Principe will be available in the UK On-Demand on all major platforms and on DVD from December 7th.